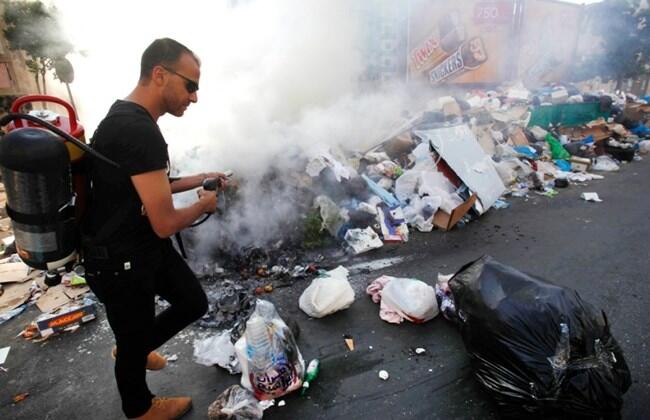 Frustrated Beirutis lit dumpsters on fire as officials continued to wrangle Thursday over where to sendBeirut and Mount Lebanon’s accumulating waste.
Environment Minister Mohammad Machnouk vowed to find disposal grounds around the country, after ministers failed to resolve the protracted trash crisis at the day’s Cabinet meeting.Piles of trash blocked off sidewalks and narrowed roads in Beirut and Mount Lebanon, a week after Naameh landfill, the primary disposal ground for the region, closed. Sukleen, the waste management contractor, halted garbage collection Sunday after the government failed to identify new dumps to take the capital area’s refuse. “I will seek landfills in every region and every district of Lebanon, and this will be our solution,” Machnouk told reporters following a four-hour Cabinet meeting. He added that Beirut’s waste is Lebanon’s responsibility, on the principle that the capital welcomes migrants from all over the country. By Thursday, 22,000 tons of uncollected garbage had accumulated on Beirut and Mount Lebanon’s streets. “We’re making progress, but this won’t be resolved in one or two days,” Machnouk said. At a news conference later in the day, Beirut MPs solicited the country’s generosity. “Just as Beirut welcomes all Lebanese, today it asks for the other regions for their cooperation,” said Beirut MP Mohammad Qabbani of the Future bloc. But other officials pushed back, saying it was not fair to expect local municipalities to shoulder a problem of the central government’s making. “It is in no way right for the government to throw this problem onto the shoulders of citizens and municipalities,” the Loyalty to the Resistance bloc of Parliament, representing Hezbollah, said in a statement. Still, the environment minister’s efforts appeared to begin to produce results Thursday, as a private Sidon company announced it had the capacity to treat and dispose up to 300 tons of the capital area’s waste per day. The region produces over 3,000 tons daily. “We can treat [Beirut’s trash] as we do Sidon’s, without creating an environmental problem, as the president of the municipality requires,” said Nabil Zantout, general manager of the IBC solid waste treatment plant located south of the city. The Municipality of Sidon is considering approving the transaction, sources told The Daily Star. The plant already treats about 250 tons of Sidon’s trash per day, converting rotting, organic waste into agricultural fertilizer and harvesting the gas byproduct for electricity generation. Solid byproducts and non-treatable waste must still be disposed, however, and Zantout said these could be buried at a site nearby. Sidon’s former municipality President Abedalrahman al-Bizri warned against the transaction, saying it would erase recent progress toward reducing the city’s trash footprint. “We have expended a lot of effort to eliminate our own dump … and we cannot allow Sidon to become ensnared again in a trash crisis that is first and last of all the responsibility of the government and the result of 20 years of neglect and indifference,” Bizri said. Sidon environmentalists and the city’s influential Al-Jamaa al-Islamiya also rejected the rumored plan, speaking frankly of their distrust. “We understand that they’re going to throw the byproducts into the sea. So no, we’re against the plan,” said Fadlallah Hassouna, the president of environmental NGO DPNA. Meanwhile, the municipality of Beirut is preparing a contract to send its trash to a private dump in Akkar, Beirut Mayor Bilal Hamadsaid in comments published Thursday. “Negotiations are finished with Al-Amana al-Arabia Company owned by Khaldoun Yaseen to bury Beirut’s trash in a piece of land it owns in the Akkar town of Srar,” Hamad said. Hamad said the municipal council and the Court of Accounts would have to approve the contract, but the Cabinet would have no say. He would not disclose its cost or the duration, but said the capital would cover new expenses from the independent municipal fund. The deal, if inked, could provoke strong objections from the northernmost region, whose officials already complain about the central government’s neglect. “We’re against it on principle. We’re asked to raise our taxes, and our children die in the Army, and we serve our country, and we carry loans, and for all that, [the government] doesn’t give us our share in the budget. They ignore and deprive us. Now they remember Akkar, when they need to dump their waste? No way,” said Akkar MP Khaled Daher. There are no sanitary landfills in Akkar, according to a 2014 study in collaboration of the Environment Ministry, meaning existing dumps there may leak poisonous effluent into the environment and vent methane and other noxious gasses. In Beirut, angry residents set fire to piles of garbage on a street not far from where Parliament Speaker Nabih Berri lives, in the Ain al-Tineh neighborhood. Smoke billowing from the burning garbage heap clouded the residential area early Thursday. The Beirut Fire Department Thursday said it had put out more than 140 fires set on dumpsters and piles of uncollected garbage across Beirut since Monday. “Burning trash pumps far more pollution into the atmosphere than trash itself and emits gases and toxic compounds that adversely affect the health of our families and our children, not to mention the risk of fire spreading to the cars parked near the containers,” the Beirut Fire Department warned in a statement. Later Thursday, the municipality of Shoueifat announced that it would begin collecting trash from the streets starting Friday, “until the Cabinet reaches a comprehensive solution.” The statement did not say where municipal workers would transport the garbage. Sukleen’s workers continued to sweep and gather trash into giant mounds, and coat them in a white powder that cuts down on the stench. Pascale Nassar, the company’s Communications Director, said it was calcium carbonate, a nonreactive and nontoxic relative of lime. Sukleen’s contract expired on July 17, but the company agreed to continue to provide its services for an interim. The Council for Development and Reconstruction issued tenders to manage Greater Beirut’s waste Tuesday, Machnouk said Thursday. He said the outcome would materialize within 15 days.  The Daily Star