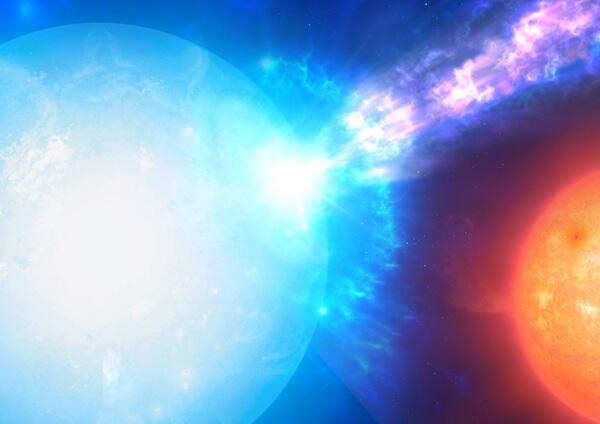 When a white dwarf shares a solar system with a full-sized companion star, sometimes it will siphon gas from its larger neighbor. The accreted hydrogen and helium builds up on the surface of the white dwarf until it reaches a critical temperature and pressure. Thermonuclear fusion ignites, combining the hydrogen into heavier elements and releasing a burst of energy and material across the surface of the white dwarf. That type of stellar explosion is called a nova.

But astronomers have recently discovered another way that white dwarfs can rapidly burn off some of their stolen gains: micronovae.

Micronovae are small explosions compared to novae, hence their name. That’s because micronovae are contained near the magnetic poles of white dwarfs. An initial paper detailing the findings was published in Nature on April 20, and a follow-up paper has been accepted to The Monthly Notices of Royal Astronomical Society.
Don’t let their name fool you, these new stellar explosions are still extremely powerful. Even at just one millionth of the strength of a novae, micronovae release about 40 million trillion pounds (20 million trillion kilograms) of material. That’s 3.5 billion Great Pyramids of Gizas worth of material.

So why haven’t astronomers caught a micronova before?

“It just goes to show how dynamic the Universe is,” said Simone Scaringi, who led the study published in Nature, in a press release. “These events may actually be quite common, but because they are so fast they are difficult to catch in action.”

While classical novae light up a white dwarf for several weeks, micronovae only shine for a few hours. It was only while analyzing data from NASA’s Transiting Exoplanet Survey Satellite (TESS) that the team even spotted the first micro-explosion. Looking further, the team found a few more signals, observing three in total.

Because the discovery is so recent, astronomers aren’t sure exactly how micronovae play into classical novae. Initially, one might think that micronovae could be the result of a white dwarf not being able to accumulate enough material to coat its entire surface and undergo a classical nova. But the astronomers found at least one of the observed white dwarfs has experienced both novae and micronovae in its past, complicating the connection.

“From our current interpretation, an accreting white dwarf will undergo a micronova if the following criteria are met,” Scaringi told Astronomy in an email. “One, the white dwarf must possess a strong enough magnetic field to funnel material onto the magnetic poles. Two, the accreted material needs to … remain magnetically confined [there]. And three, the white dwarf mass needs to be relatively high.”

More work and modeling is needed to fully grasp what precipitates a white dwarf to experience a micronova event. However, the team is hopeful that large scale surveys partnered with quick follow-ups from telescopes like VLT will unlock the mysteries of these new explosions.