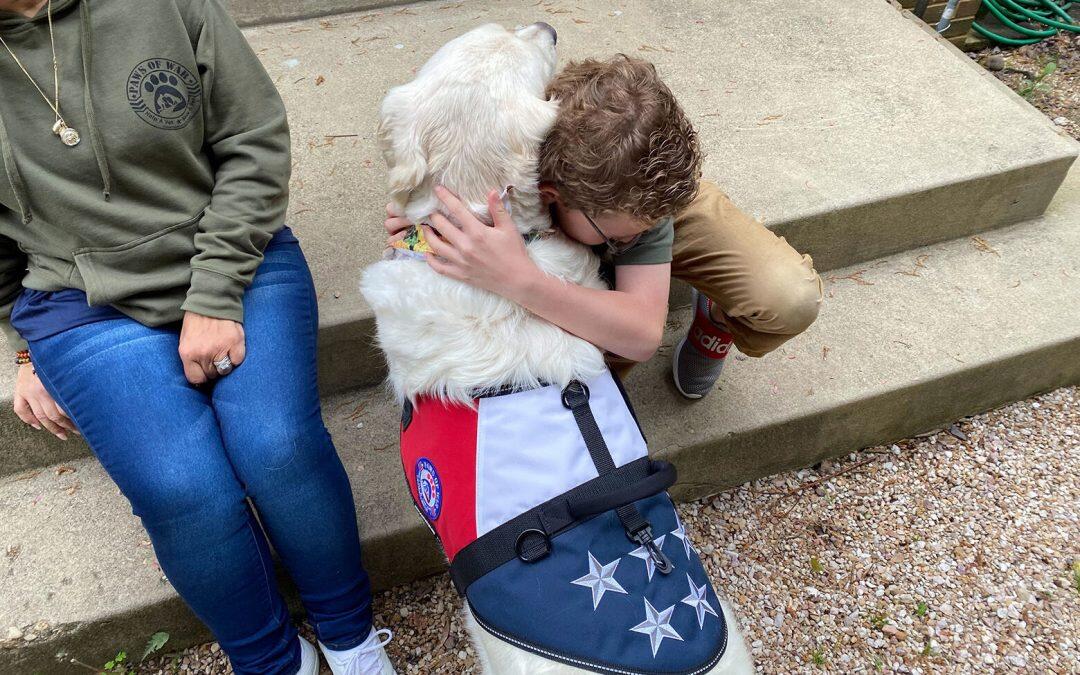 Service animals are becoming more and more common, helping people with a variety of difficulties cope with a hectic world. It’s not often that they help those living with autism, but 11-year-old Cale Nolting is a special case, and his dad’s combat experience led a nonprofit that specializes in service animals to help come to the rescue.

Cale met his new friend, a 3-year-old rescue dog named Lexi, on Sunday in the Fort Hunt area of Alexandria.
Already, there’s been lots of hugs, lots of walks, and lots of games of fetch. “This is definitely my buddy,” said Cale after a game of fetch in the backyard.

“Unfortunately, there are a lot of children who won’t benefit from a service animal because of their function level,” explained Rob Misseri, the president of the nonprofit group Paws of War. “In Cale’s case, it’s ideal. He’s a very high functioning child and we’re going to see, I think, some really great success out of this.”
Even before Lexi came around, Cale had grown by leaps and bounds.

“He really struggled when he was much younger,” said Cale’s dad, Chris. “He was nonverbal for a long time. His only ability to communicate was really having meltdowns, to the point he was uncomfortable or incapable of adjusting to a situation, that’s when he would start to communicate through screaming, through fits, through crying.”

Those who are on the autism spectrum can also have incredibly difficult times with sleep, and Cale was no different in that regard either. Much of that burden fell on Cale’s mother, Brandi, because Chris had been shipped overseas for back-to-back deployments right after Cale was born.
“It would just be 48 hours of just wide-awake binges, falling asleep for an hour, and then being up for another 48 hours,” Brandi said. Medication has helped regulate his sleep better. The hope is that Lexi can help mitigate the need for that in the future, “where if he doesn’t have to sleep with medication and Lexi is the only medication he needs, then of course we want to do that.”

The Noltings started the process last fall, after taking Cale to a doctor’s appointment for a shot that led to a lot of anxiety and stress. When a service dog was presented to Cale, it calmed him right down and getting a shot suddenly became no big deal.

But getting such a dog of your own can be a big deal, taking years of time and lots and lots of money. Paws of War helped make it happen in just a few months after hearing about the Noltings.

The hope is that as Cale gets older, Lexi will be able to work as a service dog for him and a therapy dog for others in similar situations.

“I hope they’re going to grow together,” said Chris, who hopes the relationship lasts into adulthood. “So they can rely on each other, with her being a rescue, she can learn from Cale, I hope. They can grow together and have a better foundation among each other.”

“Just seeing that he’s going to be able to give back to his community, even as an autistic individual, I think that’s important as well,” said Brandi. “He can take Lexi into a situation and show everybody, ‘Hey, we’re here, and we can educate,’ and his confidence level is going to go through the roof with that.”
“Even just having her there for a haircut means a huge difference for him,” she added. “It’s life changing.”

Misseri says the training for Lexi starts now.
“We know the dog is perfect for Cale,” he said. “Now, Cale will be working with Lexi regularly with a trainer to accomplish all the things that he wants to do.”

“It’ll help Cale just navigate through anxiety, sleep issues,” Misseri added. “At Cale’s age this is an ideal tool … It’ll play a lot of roles in his life as a service animal, and as a therapy animal, it’ll give Cale the ability to give back.”