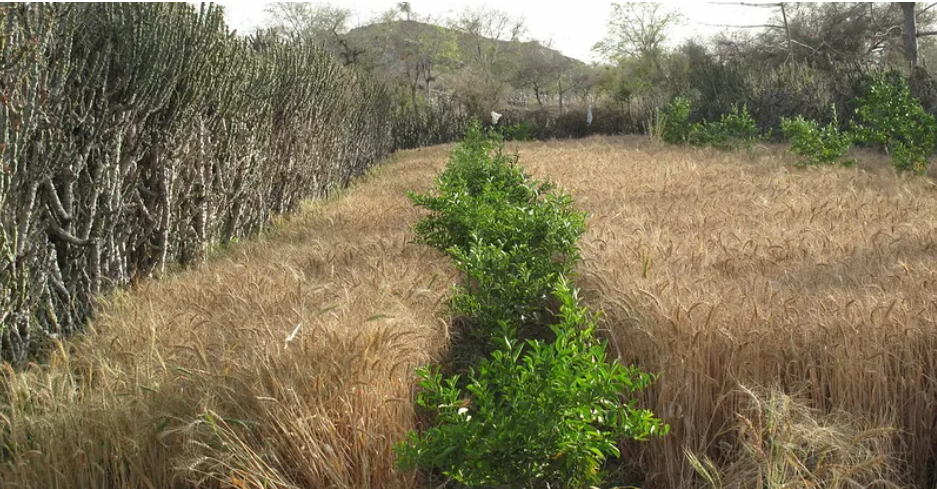 “Indian agriculture is in crisis,” said Ravi Prabhu, the Center for International Forestry Research–World Agroforestry Center (CIFOR-ICRAF)’s director of innovation, investment, and impact – and co-author of a chapter in a new book, ‘Indian Agriculture Towards 2030: Pathways for Enhancing Farmers’ Income, Nutritional Security and Sustainable Food and Farm Systems’.

Agriculture is critical to India’s economy, with over half of the workforce engaged in agriculture-related activities, and more than 65 percent of its citizens living rurally. But despite productivity gains in recent decades under the Green Revolution, which focused on mass-producing high-yielding varieties of several key crops, the sector has failed to adequately feed the sub-continent’s 1.4 billion people: malnutrition remains a major issue, particularly among children.

“It’s without question that the Green Revolution globally – and in India in particular – delivered a lot more calories, and if these were distributed adequately, then people didn’t go hungry,” said Prabhu. “But it has created a massive nutrition problem, because it drove up the production of rice, wheat, and maize, and displaced a whole lot of traditional crops, so the nutritional values in food dropped. And that came with a whole lot of environmental crises.”

While the shift precipitated significant economic growth that benefitted some sectors of the population, many smallholder farmers have been left behind. Green Revolution-style agriculture is capital-intensive, but prices for the bulk commodities it yields are not particularly lucrative, so farmers can get stuck in “poverty traps” with cripplingly-high debt levels. Meanwhile, the agricultural practices that underpin the approach – such as mechanization, monocropping, high pesticide and fertilizer inputs, and irrigation – have taken a serious toll on the ecosystems upon which they rely: water sources, soil health, and agrobiodiversity have all been depleted and degraded; productivity is beginning to plateau as a result.

“Fundamentally, we have to think about Green Revolution agriculture as existing between a metaphoric ‘resource mountain’ which is never exhausted – so you can pump as much fertilizer, pesticides, and water as you want from it, and it renews itself automatically outside the bounds of the system – and a huge sink or black hole, where you can simply dump all the waste, whether it’s air or water pollution or whatever,” said Prabhu. “Within that, you can optimize: if you have the money, you can pump in the inputs, and you’ll get the outputs. But that equation no longer works, because we live in a finite world: the resource mountain is depleting, and the sinks are filling up.”

In that context, the book – which captures the outcomes of a national dialogue on the topic that has been in process since 2019 – shares a range of perspectives on the transformational change in policy and practice that’s required to set India on a more sustainable and equitable post-Green Revolution future.

It was launched on Monday by India’s Minister of Agriculture and Farmers’ Welfare, Shri Narendra Singh Tomar, who shared his hope that “[w]ith the efforts of all the stakeholders, including experts, the hard-working farmers, and agricultural scientists, we will be able to handle the challenges identified and take Indian agriculture and the country to new heights.”

The book was edited by Ramesh Chand of public policy think tank NITI Aayog; Pramod Joshi, formerly of the International Food Policy Research Institute (IFPRI); and Shyam Khadka, a former India representative for the Food and Agriculture Organization of the United Nations (FAO).

The various chapters explore issues such as dietary diversity for nutritious and safe food; climate crisis and risk management; water in agriculture; pests, pandemics, preparedness and biosecurity; transformative agroecology-based alternatives for a sustainable and biodiverse future; science, technology and innovations in agriculture; and structural reforms and governance.

In the chapter on agroecology, which Prabhu co-authored alongside CIFOR–ICRAF colleagues Shiv Kumar Dhyani, Devashree Nayak and Javed Rizvi, the writers explore multi-scaled and nested responses to the challenges that the sector faces, which involve harnessing agroecological science and context-specific innovation and adaptation throughout agriculture and the food system.

“Conventional modern agriculture assumes that soil is substrate; it’s simply there to hold the plant up, and then we deliver everything else,” said Prabhu. “Now, if you’re looking at a large farm in a Western country where labor is short, you’re going to use mechanization, and you may have the resources to do this. But if you’re looking at a smallholder farmer in Asia, they’re never going to be able to afford any of this: it’s much smarter to work with the soils and the natural systems. And then when you factor in the changing climate, we’ve got to create systems that are much more resilient.”

The authors cite examples of where agroecological science has been successfully deployed to this end, such as a project carried out in two districts in the state of Odisha, which over three years has benefited over 9,000 resource-poor farmers by helping them to establish agroforestry systems that boost production, provide new income opportunities, and scale up dietary diversity.

They put forward six principles that are required within any search for alternatives, which include ensuring that the welfare and advancement of farmers and food system actors meets expectations; better access to quality seeds and planting material, along with improvements to supply chains for these; capacity and capability strengthening; shifting to better adapted species and practices; transitioning to more resilient forms of agriculture that still meet productivity thresholds; and managing agricultural landscapes for more than food production.

The authors also offer three principles for policy change: embracing the concept of stewardship as the paradigm within which change can take place; recognizing that farmers must be viewed and rewarded as stewards of the land and all of its ecosystem services, not just as producers of food; and taking into account the need for constant, context-specific adaptation.

“What we are saying in our chapter is: “let’s rethink the whole premise of the Green Revolution” – which basically said that we could impose science on nature and get good results,” said Prabhu. “And we’re saying that we need to use science to understand nature – and work with nature – to get better, more sustainable results.”