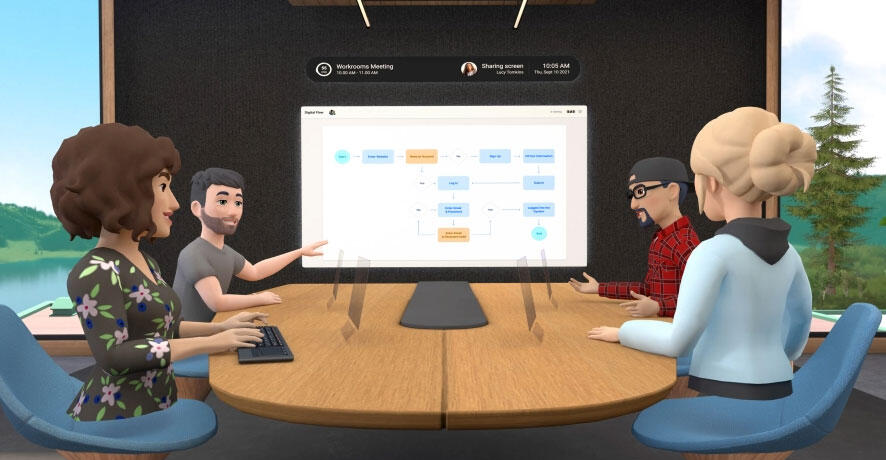 This new “home office” virtual concept was born from the rapid transition the pandemic forced onto a remote-first work experience that left many remote workers feeling isolated and solitary. For many remote employees, the transition has been less than inviting.

Existing video conferencing tools such as Teams and Zoom have many remote workers feeling disconnected from office dynamics. The rebranded company behind Facebook, Meta, created Horizon Workrooms to remove such barriers and improve collaboration through VR enhancements. This nascent technology is obviously an ongoing work in progress.

Meta is working on VR tech that will change all of that. The company in August 2021 launched its open beta version of Horizon Workrooms.

Work on the Horizon
The software brings to remote corporate workforces a flagship solution for collaborative experiences. In this metaverse, remote employees come together to work in the same virtual room, regardless of physical distance.

The Horizon Workrooms platform works across both virtual reality and the web. It is designed, according to Meta’s marketing materials, to improve a team’s ability to collaborate, communicate, and connect remotely.

With it, remote workers gather in a virtual environment they view on their home computer screens. There, they brainstorm or use a whiteboard to present ideas.

The technology goes beyond that, however. Remote workers can collaborate on a document, hear updates from team members, hang out and socialize, or simply have better conversations that flow more naturally.

At least at this initial open beta stage, businesses can use Workrooms for free. But it is a much better solution when used in conjunction with the new Oculus Remote Desktop companion app for Mac and Windows, and Oculus Quest 2 VR headsets.
TechNewsWorld recently discussed the new world of virtual meetings with an early tester of Meta’s alpha version. Eddy Williams, employee experience consultant at The Bot Platform, took the lead in sharing the team’s VR meeting room experiences.

These Bot Platform workers were used to working with trend-setting software products their company developed. But jumping into Meta’s VR experience was a newbies’ experience in their workplace.

The Bot Platform always had a great working relationship with Meta. Its first bots all operated on Messenger, and the company was among the first adopters to Workplace from Meta, both as an enterprise user/customer and a premier technology partner, according to Williams.

“We have found that our values align in many different places, particularly on the Workplace side, where we are both looking for ways to better connect people in their working lives and help empower companies to build a better employee experience,” he told TechNewsWorld.

Unique Work Benefit
An unexpected but welcome benefit of that relationship is sometimes getting early access to exciting new products and features, he shared. In this case being asked to participate in the early alpha program of the VR metaverse meeting software was a prize offer.

“For many of us, this was our first experience with VR, and I say without hyperbole or exaggeration that our minds were blown,” marveled Williams.

He became an overnight Beat Saber addict. That is a VR rhythm game where you slash the beats of adrenaline-pumping music flying towards you, surrounded by a futuristic world.

Other members of the team who had already experienced VR were understandably less blown away. Still, they were seriously impressed by some of the improvements to the hardware and native operating system, most notably the improvements to the comfort and maneuverability of the headset, and the upgrades to the internal ‘guardian’ system which stops users from walking into walls and TVs, explained Williams.

Several days after warming up to life in VR, the entire team settled into its first induction to Workrooms. To put it simply, the first virtual meeting was otherworldly.

A Day at the Metaverse Office
The team’s initial impressions were excellent, confirmed Williams, although everything appeared somewhat “cartoonified.”

“You got a real sense that you were sitting around a table in a seriously cool looking meeting room with your colleagues. One of the first things you notice is everyone’s different avatars,” Williams quipped.

“Despite the cartoon nature of everyone’s faces, there are enough customizable options to fairly clearly recognize who everyone is,” he observed.

You can also customize your attire, which may sound trivial, he agreed. But it allows people to convey a sense of individualism and personality into the room.

“If VR meetings are going to become a common part of future communications technology, that will be extremely important,” suggested Williams.

The rooms have a number of features that help give co-workers a comparable experience to a real-world meeting room. Something the participants found very useful was the ability to customize the room’s layout.

For example, for the group’s Friday afternoon culture meeting, team members sat around the circular boardroom table. For the all-hands training sessions, they could easily switch to presentation/theatre layout with just a couple of clicks of the hand sensors.

“All of these layouts are contained in what I can only describe as dream meeting rooms, with floor to ceiling windows, and a view of lakes and mountains that I would chew my arm off to see every day,” said Williams, adding that his South London street view has its own charms.

Adjusting the Tools
In all of these modes, users can connect laptops into the room and view them in VR, along with a virtual representation of the keyboard. So, meeting attendees can operate their computers without peeking back into the real world, noted Williams.

“Once the laptop is connected, you can share your screen with everyone in the room, either in the place of their virtual laptop, or on the big screen in the room. This was a great plus for collaboration, which is the ultimate name of the game for the platform,” he said.

Everything Williams mentioned so far, he found interesting and potentially saw the advantages over a standard Teams or Zoom meeting. But one function in particular he saw as an absolute game changer — spatial audio.
Like everyone, Williams said he is constantly frustrated by the inability to have a natural conversation over video calls and instead need to pass around the imaginary talking stick and go through the never-ending awkwardness of “no you go first, no you go first” and so on. The platform software and the multiple speakers on the Quest 2 headset solves that problem.

“But the kicker is they can both speak at the same time, and you can hear them both,” Williams added.

Final Impressions
Every time his team used Workrooms, Williams was both astonished by the technology and amazed by the usefulness and potential application for improved collaboration.

Combine this with the immersive nature of VR, and Workrooms genuinely felt like a real work environment conducive to good team work, he said.

“It provided a sense of togetherness that you do not always get from standard video calls,” he offered.