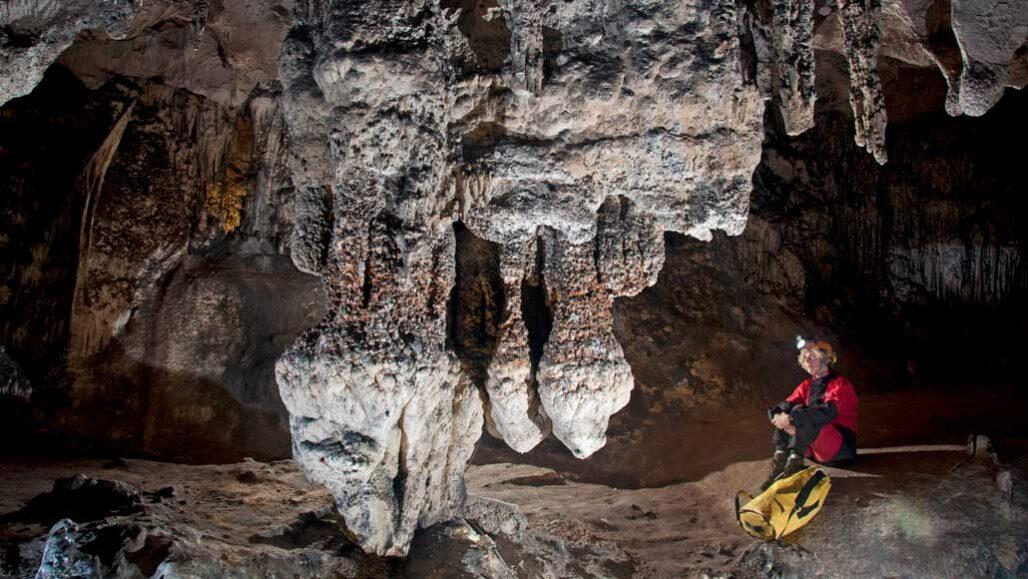 The future of sea level rise may be written into the walls of coastal Spanish caves.

Mineral “bathtub rings” deposited inside the limestone Artà Caves on the Balearic island of Mallorca show how high seas rose during the Pliocene Epoch — a time when Earth was about as warm as it’s expected to get by 2100. Those mineral deposits suggest the planet’s seas were around 16 meters higher on average than they are today, researchers report August 30 in Nature.

That measurement provides the most precise peek yet into what may come as climate change causes ice sheets to melt and ocean waters to rise — a process that could happen over hundreds to thousands of years. Previous estimates of Pliocene sea levels gave similar results, but relied on more indirect dating methods or failed to incorporate information about the subsequent rise and fall of the Earth’s crust. The Artà analysis, however, takes that rise and fall into account.

The new study’s combination of precision dating and corrected sea levels also may help answer a crucial question: How much of Earth’s biggest ice sheet melted during the Pliocene? These sea level measurements suggest that, while smaller ice sheets in Greenland and western Antarctica melted severely, only the parts of the massive eastern Antarctic ice sheet that jutted into the sea melted during that era, says Alan Haywood, a paleoclimatologist at Leeds University in England who was not involved in the study. It’s still unclear, however, how today’s unique warming patterns will affect ice sheets.

“Anything that gives us added information on how sensitive the ice sheets are … is going to be very important,” Haywood says.

Conditions during the Pliocene, 5.33 million to 2.58 million years ago, may offer the best example of what a human-addled climate will eventually look like (SN: 11/28/17). In the past, paleoclimatologists mainly used two approaches in reconstructing Pliocene sea level changes. One links ratios of two types of oxygen, or isotopes, in fossilized sea creatures to a global record of oxygen ratios and ice sheet cycles. The other uses the ages of ancient coral reefs to estimate ancient sea levels.

For the new study, researchers searched caves for evidence of past sea level change (SN: 4/15/13). “Caves are a very protected environment,” says study coauthor Oana-Alexandra Dumitru, a geochemist at the University of South Florida in Tampa who began collaborating with Mallorcan researchers as a graduate student. “We don’t worry about erosion and other weathering after deposition as much as you would about terrestrial or other records.”

In the 1970s, Mallorcan researchers found aragonite and calcite deposits on stalactites and stalagmites in the Artà Caves. The deposits, called phreatic overgrowths, accumulate over years when brackish seawater laps against the rock. Similar features have been found in coastal caves on the Italian island of Sardinia and in Mexico and Japan. Early dating attempts in the 1990s and 2000s focused on samples only a few hundreds of thousands of years old. But Dumitru and colleagues used a dating method capable of reaching back further in time, comparing ratios of uranium to lead in the minerals, to determine when the much older Pliocene deposits formed.

As Earth’s temperatures rose, higher levels of seawater washed into the caves. That rising water left behind mineral deposits at heights from 14.7 to 23.5 meters above today’s sea level, Dumitru’s team found.

One of the lower deposits corresponds with the mid-Piacenzian Warm Period, which lasted from about 3.3 million to 3 million years ago. Global temperatures during that time period were 2 to 3 degrees Celsius warmer than in modern, preindustrial times — and resemble leading forecasts for the year 2100. Global mean sea levels then were 16.2 meters higher than today, Dumitru and colleagues calculate.

The higher of the six mineral deposits studied corresponds to the Pliocene’s warmest period about 4.39 million years ago, when temperatures were about 4 degrees C higher than in preindustrial times. That Artà sample suggests that seas were about 23.5 meters higher than today. “We still may not know exactly how much sea level rose,” Haywood says. But with results like these, “we’re getting more confidence that we’re in the right ballpark.”