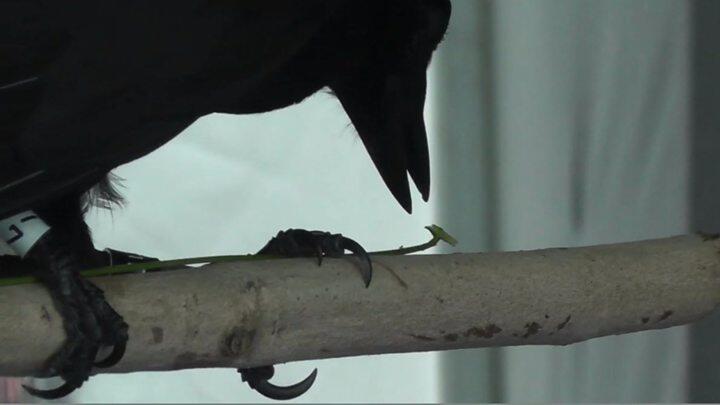 Tool-making crows have allowed us to see the first foundations of a technological breakthrough.

New Caledonian crows spontaneously make hooks out of plant material, using them to “fish” for grubs and spiders.

Experiments have now revealed that these hooked tools are 10 times faster at retrieving a snack than the alternative tool – a simple twig.

Measuring the hooks’ effectiveness tells scientists something about what drove this tool-use to evolve.

Beyond that, the scientists say the insight has provided them a first glimpse of the “evolution of a new technology” in the animal kingdom.

The findings are published in the journal Nature Ecology and Evolution.

These crows are the only animals known to make hooks.

The earliest human-made fishing hooks – from about 23,000 ago – were one of the most significant technological milestones.

The archaeologists, who unearthed these seashell-carved hooks in a cave on the Japanese island of Okinawa, said this early “maritime technology” had allowed humans to survive on islands.

Lead researcher on the crows study, Prof Christian Rutz, told BBC News: “[Our invention of fish hooks] was incredibly recent – only 1,000 generations ago, which is an eye-blink in evolutionary terms.

“When you think that we went in that 1,000 generations from crafting fish hooks to building space shuttles – that’s absolutely mind-boggling.”

Understanding what drove the crows’ tool-manufacturing provides Prof Rutz and his colleagues with a unique and valuable “non-human model” to investigate the origins of this fundamental step in human progress.

“When I see these crows making hooked tools, I have a glimpse of the very foundations of a technology that is evolving,” Prof Rutz said.

Juan Lapuente, an ecologist from Wurzburg University in Germany, who studies primate tool-use, said the tool-making and tool-using behaviour in crows was “amazing”.

He added: “We tend to assume that the closer an animal is to us, the more intelligent it should be and thus we understand more easily that primates and especially the chimpanzees make and use tools.

“But we have to be more humble and accept that many ‘small-brained’ animals are intelligent enough to make and use tools and sometimes are even more proficient at this task than our cousins.”

Prof Rutz said that while he could only speculate about the future development of crow-made tools, he did not think making these hooks was “the end of the story” for the birds.

“I think this species will come up with even better tools,” he said.