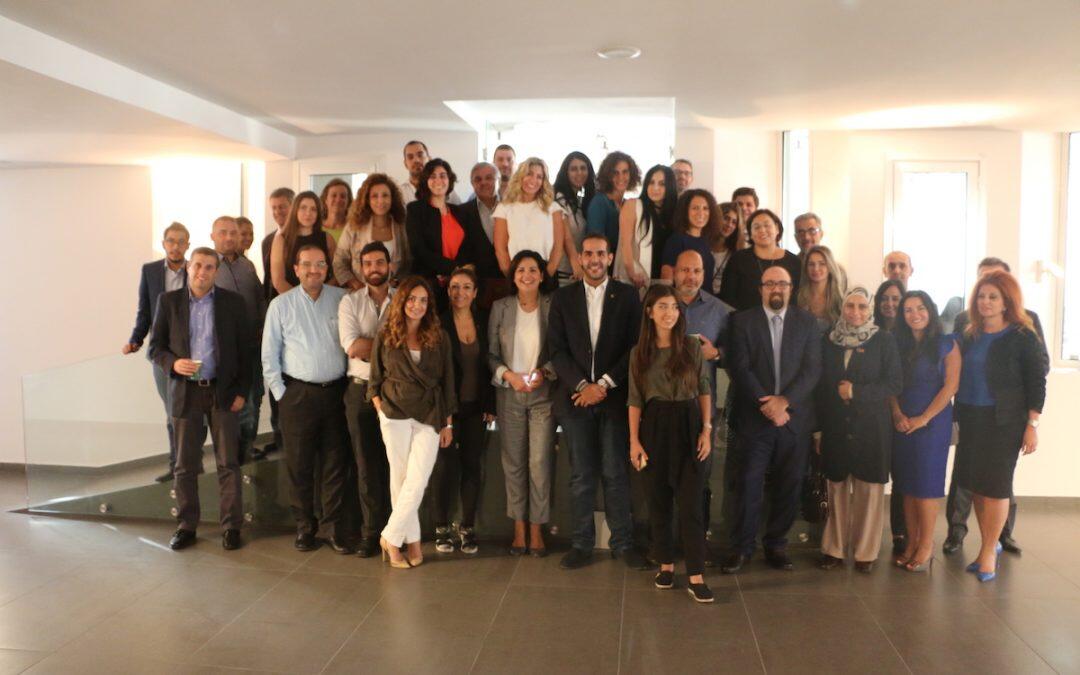 Lebanon Climate Act initiative organized today a training session for private companies at the headquarters of the Chamber of Commerce, Industry and Agriculture of Beirut and Mount Lebanon, as part of a series of sessions aiming to deepen the knowledge about the mechanisms to tackle climate change, and to identify the ways in which the private sector companies can contribute to these mechanisms through the design and implementation of activities that will reduce the carbon footprint.
The Lebanon Climate Act, the first of its kind in MENA countries, which was launched in June 2016, aims at supporting economic growth in a way that also creates value for the society by addressing climate change challenges, through low-carbon economy. Since its inception, more than 120 companies from the private sector and civil society in Lebanon have joined the initiative.
This initiative is implemented by Green Mind Society in collaboration with the United Nations Development Programme, with support of the Central Bank of Lebanon and in partnership with the Chamber of Commerce, Industry and Agriculture of Beirut and Mount Lebanon. The Business Knowledge Platform organized by Lebanon Climate Act will be supported in 2016 -2017 by the regional Clima-South project, funded by the European Union in order to support climate change mitigation and adaptation in the southern EU countries. The training during the work sessions will be conducted by the international trainer Aglaya Antily and the environmental consultant Rawad Massoud.
Lebanon Climate Act helps each company to develop its strategy to limit climate change in an intelligent way which achieves economic and environmental benefits.
Green Mind’s president, Nada Zaarour, confirmed during the opening of the first training session, that Lebanon Climate Act initiative constitutes an opportunity to increase profits in our work enhance and economic growth in Lebanon. This initiative is organized in line with Lebanon’s Intended Nationally Determined Contributions (INDC), i.e Lebanon’s commitments at Paris Climate Conference COP 21.
Zaarour stressed the responsibility of the Lebanese government to accelerate, in advance of COP 22 that will be held in the city of Marrakech in Morocco, the ratification of the Paris Convention, referred to the parliament under a decree which allows Lebanon to join the Climate Convention, signed until now by 197 countries, including Lebanon. The convention was ratified until now by 62 countries, with carbon dioxide and other greenhouse gases emissions equivalent to 51.89% of total global emissions.
Zaarour concluded: “We hope to see in the next COP22 positive changes and decisions which actually contribute to addressing climate change by building strong communities, protecting the most vulnerable areas, and adopting behaviours which are more considerate of the environment in our world.
In turn, Vahaxn Kabakian, the manager of the climate change project at the Ministry of Environment, implemented by the United Nations Development Programme, stressed that Lebanon Climate Act will be present at COP22 in Marrakech through a seminar which will be held simultaneously with the conference, so that this program will reach a wider area, especially the neighboring countries.
Kabakian pointed out that Lebanon submitted in September 2015 its INDC contribution and has set a target to reduce its emissions 15% by 2030, and eventually to 30% if international support is available.
Kabakian also stressed the importance of the Lebanon Climate Act in the contribution of the private sector to attain Lebanon’s INDC, through voluntary initiatives in addition to compliance with governmental measures intended to be applied.
Bernardo Sala, team leader of Clima-South project, funded by the European Union which supports Lebanon Climate Act, pointed out that conducting the training session in Beirut, simultaneously with the convening of the European Parliament to ratify the climate change convention, confirms that work is under way at various levels and institutions to address climate change.
The Clima-South project aims to promote dialogue and cooperation on climate change between the EU and the Southern Mediterranean countries, support the transition of partner countries towards low-carbon economy and development of climate resilience, within the context of sustainable development, enhance regional cooperation, information sharing, capacity development on climate change mitigation and adaptation, promote development in low-carbon and energy use field and build national capacities in the formulation of integrated climate change strategies, for climate change mitigation and adaptation.
According to scientific reports issued by the Lebanese Ministry of the Environment in 2016, and related to climate forecasts, the average temperature will rise in Lebanon by 2050 to 1.7 oC , and to 3.2 oC by 2100.
Lebanon is also suffering from rising sea levels and it may witness a decline in falling rains, warmer and drier summers and more extreme weather conditions, such as floods. The tourism, agriculture and health sectors are among the most vulnerable to these conditions. In many cases, climate change will exacerbate the water and power crises in Lebanon as well as air pollution and other environmental problems.
The scientific reports focus on the need that global emissions reach their peak in 2015, then return to their levels of 1990 in 2020, and then decrease to 80% in 2050.
Last week, the UN World Meteorological Organization announced that the concentration of green house gases reached new record levels in 2015 and that carbon dioxide concentration exceeded 400 parts per million (ppm) in the atmosphere. Exceeding the CO2 threshold of 400 ppm is considered a serious challenge to maintaining earth temperature. Limiting temperature increase to 2 oC requires that the concentration of greenhouse gases should be equivalent to 350 ppm of carbon dioxide.