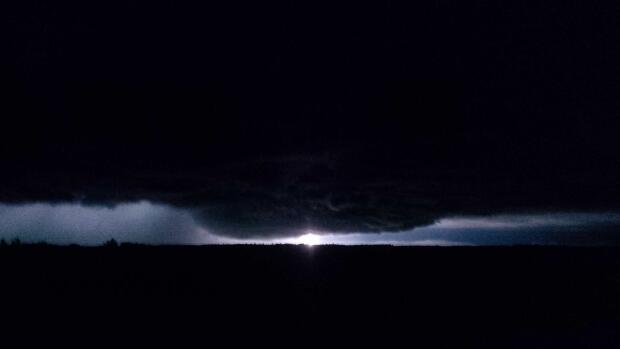 The tornado warnings issued for Yellowhead county have been dropped by Environment Canada, however severe thunderstorm warnings are still in the effect.

Earlier in the night, Environment Canada issued a critical alert saying a rotating thunderstorm — that could produce a tornado — was travelling northeast of Edson.

“This dangerous storm is likely producing very large hail, and may produce a tornado over the next 30 minutes,” the alert read.

The winds in the area are moving east at 50 kilometres an hour. The agency says these storms are “capable of producing very strong wind gusts, nickel to ping pong ball size hail and heavy rain.”

Earlier in the day Braydon Morisseau, with Prairie StormChasers, witnessed a Tornado briefly touch down northeast of Edson.

“It was very brief, it lasted like a minute before it dissipated,” Morisseau told CBC News Sunday evening.

Even though the tornado warning has ended Morisseau said the thunderstorm that remains is quite powerful.

“Right now there are very violent winds, some bigger hail in there, lots of lightning.”