Thousands Got Naked and Painted Their Bodies Blue for Climate Change 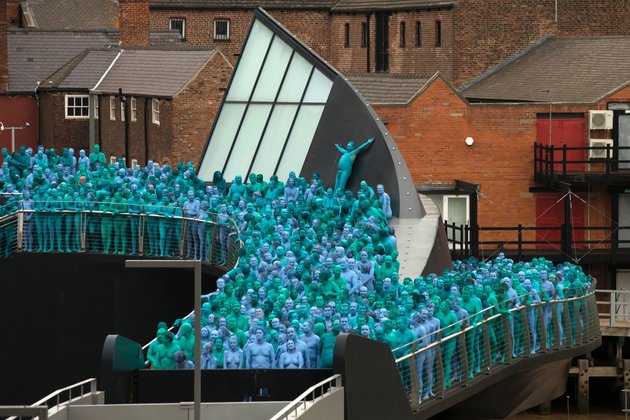 If you were taking a morning stroll through the British town of Hull over the weekend, you might have been shocked to find a surreal, Smurf-like scene: a crowd of roughly 3,200 completely nude people gathered in the streets, all clustered together and painted bright shades of marine blue.

The art installation was the brainchild of U.S.-based photographer Spencer Tunick, who was asked by a local museum to create one of his iconic large-scale works. Tunick put out a call for volunteers to participate in the visual project, which brings attention to the rising sea levels propelled by climate change.

“It’s the idea that the bodies and humanity is flooding the streets,” Tunick told The Guardian.

Things got started in the early hours of Saturday morning, as the volunteers stripped and painted their bodies with a collection of four shades selected and distributed by the artist and his team.

“I always say that it’s the least sexual thing that I’ve ever seen in my life,” said 80-year-old Stephane Janssen, who has taken part in many of Tunick’s projects. “We are naked, but it is not important. We are equal. Big people, small people, all colors, all walks of life.”

The photographs will be ultimately displayed in the local Ferens Art Museum next year, as Hull celebrates its designation as a 2017 U.K. City of Culture.