From NYC to southern Ontario for fresh-air friendship 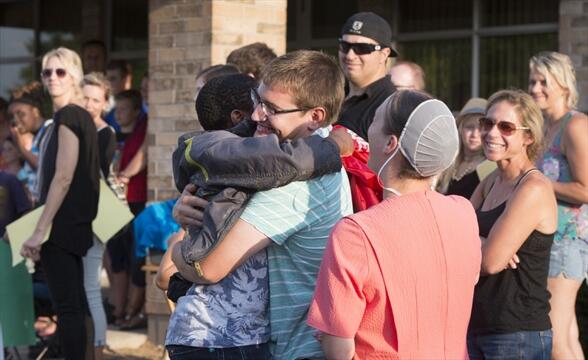 Moving from the bustle of the Bronx to sleepy small-town Ontario is a drastic change, no matter the age.

But for 10-year-old twins Tomi and Tobi Oyaniran, the marathon bus ride to the North has become the yearly highlight of their summer.

“There’s, like, no stuff on the floor. New York has so much pollution, you don’t even want to know!” an animated Tomi shouts, exploding with energy after running into the arms of his host family who eagerly awaited his arrival in a Grimsby parking lot.

His brother Tobi had already been visiting a five-acre property near Listowel every summer since he was six years old through the Fresh Air Fund, a charity that has brought inner-city New York children to greener corners of North America since 1877.

After seeing first-hand the positive experience their friends had hosting Tobi, Derrick Martin and his wife Nicole decided to start taking in Tomi two years ago.

“There’s never a dull moment,” Martin said. “There’s lots of highs and some lows, but the highs always outweigh the lows.”

Fishing, cottaging, swimming, biking, campfires, amusement parks and even flying are all on the to-do list for the twins.

“The first time he came, we opened the door for him and he just ran,” said Tobi’s host mom Jeannette Frey.

“I was really afraid, but excited,” said Tobi, recalling his first trip to Canada. Now he sees Ontario as a chance to free himself from the concrete jungle, roam freely, and, most importantly, stop worrying about homework.

On Thursday there were 24 children on this bus to Grimsby Mountainview church. Host families picked up the giddy children and headed for their rural hometowns across southwestern Ontario and the Niagara Region.

“They form bonds with these families and they grow up together.”

While the fund was originally started with the idea that fresh air might stave off tuberculosis for New York children, Murphy says the program has evolved into more of a cultural exchange for both host families and their guests from the Big Apple.

“We’ve definitely learned to love them,” said Tobi’s host Calvin Frey. “We hope to know him until he’s 80.”

In the first year, children ages seven to 12 stay for one to two weeks with the families. After their first meeting, they can come back for longer and until they reach 18, Murphy said.

Many of the families will even take in Fresh Air children for Christmas and keep in touch with their families year round.

One such volunteer is Tammy Blake, who’s hosting two eight-year-old boys this summer. She recently attended the engineering graduation of a 22-year-old girl she took in through Fresh Air at age six.

“She was the first in her family to go beyond high school,” Blake said. “We just learn to appreciate so much.”

But despite all the positive experiences and bonds formed through Fresh Air, there is still more demand from New York children than spaces available, Murphy said.

For more information on how to participate, visit freshair.org.