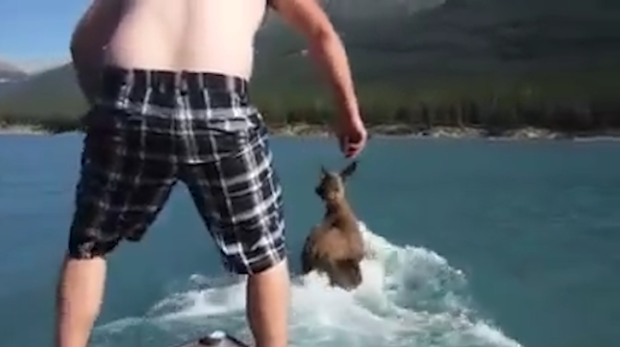 A man has just been charged with riding a moose. We’re not joking.

Footage of the topless man tailgating the moose and then jumping on it was posted to YouTube in June last year.

It racked up more than 2 million views but now, a year later, authorities have decided to take action.

The video shows the animal trying to run across the lake as a boat tailgates behind it.

A group of guys can be heard in the background laughing as one of them tries to jump on to the moose’s back.

The boat eventually catches up and the topless man succeeds in startling the wild animal by landing on its back and riding it for a few seconds until he falls off.

Two men, from British Columbia, have now been charged under the Wildlife Act.

They’ve each been charged with harassing wildlife with the use of a boat, attempting to capture wildlife and hunting big game that is swimming.

The Conservation Officer Service (COS) in North Vancouver said the incident occurred in Tuchodi Lakes, near Fort Nelson, British Columbia.

The men are due in court on August 8.