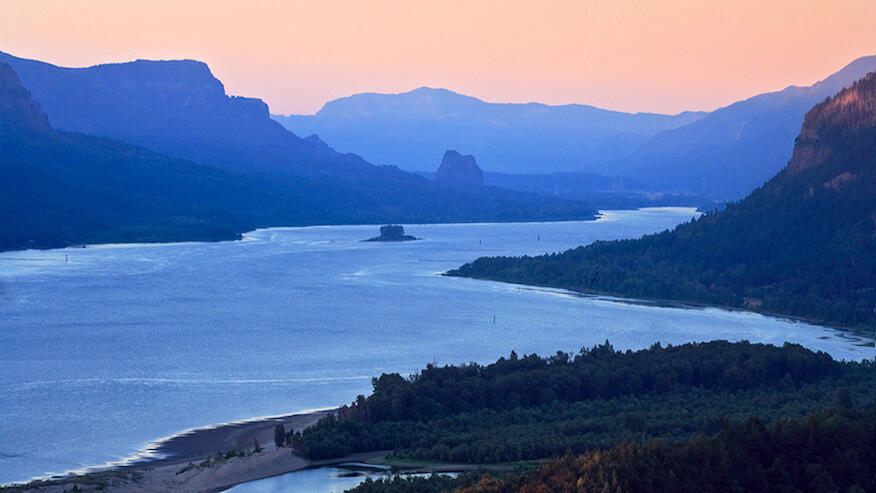 The Columbia River is the largest river in the Pacific Northwest region of North America. The river rises in the Rocky Mountains of British Columbia, Canada. It flows northwest and then south into the US state of Washington, then turns west to form most of the border between Washington and the state of Oregon before emptying into the Pacific Ocean. The river is 2,000 km long, and its largest tributary is the Snake River. Its drainage basin is roughly the size of France and extends into seven U.S. states and a Canadian province. The Columbia and its tributaries have been central to the region’s culture and economy for thousands of years. They have been used for transportation since ancient times, linking the many cultural groups of the region. The river system hosts many species of anadromous fish, which migrate between freshwater habitats and the saline Pacific Ocean. These fish especially the salmon species provided the core subsistence for native peoples; in past centuries, Indigenous peoples traveled across western North America to the Columbia to trade for fish. The Columbia supports several species of anadromous fish that migrate between the Pacific Ocean and fresh water tributaries of the river. Sockeye salmon, Coho and Chinook (also known as “king”) salmon, and steelhead, all of the genus Oncorhynchus, are ocean fish that migrate up the rivers at the end of their life cycles to spawn.[139] White sturgeon, which take 15 to 25 years to mature, typically migrate between the ocean and the upstream habitat several times during their lives.