The white ribbon day, a symbolic protest For the continuous waste crisis 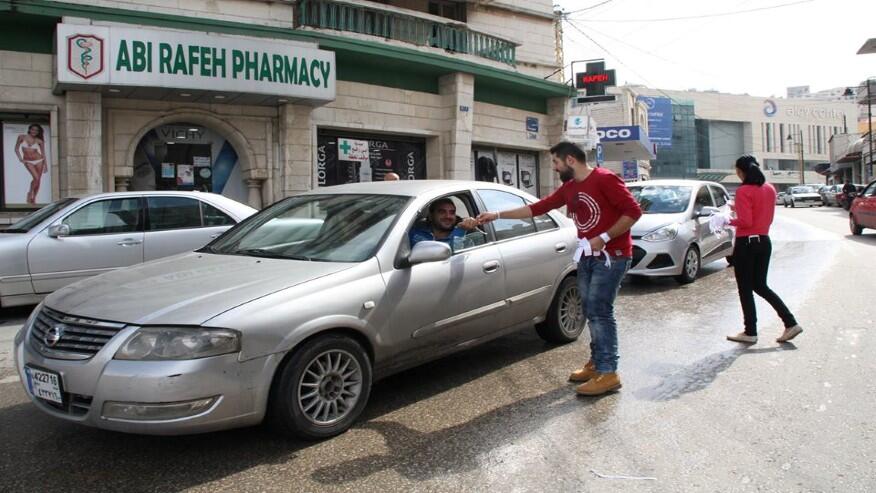 &nbsp; Prepared by – Suzanne Abou Said Daou On Wednesday 28th of October, a white ribbon campaign has been launched and spread through the regions, following the #you Stink movement call for a strike that was not fully implemented but was simply performed alternatively by wearing a white ribbon and today Thursday a demonstration will take place. The white ribbon day, was the name that many activists used including those belonging to the group “The Mount Lebanon Movement”, where white ribbons were handed by to this group activists’ to drivers, on roundabouts in, Khaldeh, Aley, and Hammana, as well as in Chouf area, in the roundabouts of Baaklin and  Bekaata and is worn as a symbol of peaceful protest and a videos showing this campaign in different regions could be seen following the link at the end of the article. Greenarea, contacted Alaa Sayegh one of the activists of this new movement, who said, “the Mount Lebanon movement, is 66 days old, we started no more than 5 friends but now as the numbers have increased we heeded to organize ourselves as our movement is gaining popularity and momentum, so as to include activists from all the villages in the Mount Lebanon area including Choueifat, Aramoun, Chouf, Aley and Baabda areas. And he pointed that, “we’re many movements in one, for example we cooperate and include activists from Al Matn Movement, but the different movements’ names don’t matter as long as the goal is one, and that is to change the deteriorating present situation, starting from the waste crisis and aiming at a change in the system that induced this crisis”, and he added that, “our movement coincides with the other movements such as You stink, We Want Accountability and Change is Coming, so you’ll find among us people from You Stink, We want Accountability, The change is Coming, Al Matn Movement and so on. And we participate in any movement we find as a committee suitable though we don’t belong to any of these. However, many of the activists of these groups are our friends and we cooperate with each other and we aim towards the decentralization of the civil movement to the regions, for the suffering from the crisis is not only in the capital, it’s affecting our whole country”. When asked about their previous activities, Sayegh told greenarea, “as well as participating and supporting all the activities of central movements and those in the regions, our last activity was yesterday as  the white ribbon day which gained positive feedback”,  and he stated that “our first activity was a demonstration in front of the Municipality palace in Sawfar, following the intentions of the authorities to use the quarries of Aindara as landfills, where Aindara at an altitude of 1260 meters has rich sources of  underground water and most of the region uses this water as well as Beirut, especially the  Ain Sfayyat, also we contributed with the Ain Wa Zain sorting at source initiative, where now the village of Ain Wa Zain sorts up to 80 percent of its trash, also we have current activities in collaboration with the Ain Wa Zain Environmental Club in the region of Maasser El Chouf concerning the sorting initiative, as well as our participation in any movement called by the activists in the capital such as the symbolic demonstration in front of the Electricité du Liban building and we participated in the packaging of the trash in Bhamdoun and Baaleshmeih as well as Beirut riverbed as well as many others, and we’ll be participating in today’s movement with you stink as well”. Sayegh pointed that, “we’re organizing ourselves by making committees that include all activists from different movements and with different tasks, such as legal, media and so on, the committees are made as to monitor, report and seek legal actions against all the abuses against environment, civil rights and the development and prosperity of our region and country, and currently we are seeking legal actions to put pressure on the non cooperating  municipalities to assume their responsibilities in accordance with the cooperating municipalities in terms of finding a solution to the waste crisis, not neglecting the main target of making a positive impact and sustainable changes in all sectors”. In general many movements have been founded following the 17th of July Naameh-Ain Drafil landfill closing, while some try to monopolize the movements by being the first; others are trying to do their best to be oriented in their present actions targeting the waste crisis as well as other current and future issues. And although the coordination committee Saturday, has reached an unfruitful end, it is the peaceful goal that counts that many activists all over Lebanon sought, by wearing the symbolic white shirt or tying a white ribbon on their arms, foreheads, even attaching it to their children’s strollers; and though many who adopted this gesture of solidarity don’t belong to any movement but they hope to induce a reflex from this rigid government that has witnessed the wet filth during the previous days invading our streets without making any futile action. &nbsp; Video source: Aley: https://www.facebook.com/harakjabal/videos/488177528028876/ Hammana: https://www.facebook.com/harakjabal/videos/488103364702959/ &nbsp;