Waste to the streets of Beirut after 24 hours 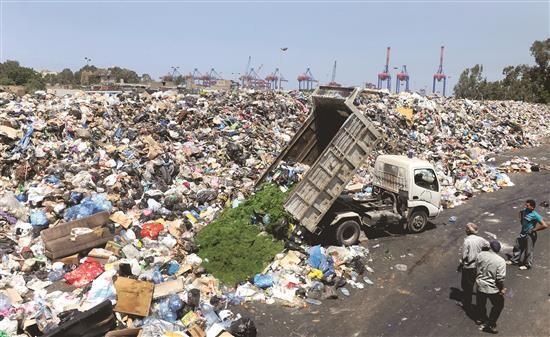 Habib Maalouf All roads leading to a temporary solution to the issue of waste, unlocked, with total capacity of the site Karanteena peak, and still selected sites alternative is uncertain, in particular the site chosen near the port of Beirut, which and find objections by union officials and workers of the port. While concerned with the sources for «ambassador» confirmed that the land of the port processing yesterday began to receive capital waste, and needs to be three days if it does not get hampered what, the same sources forecast that the waste back to the accumulation in the streets of the capital, starting from tomorrow, Thursday, «as it does not accommodate Sukleen plants in Karantina more than waste a single day ». Sources confirmed the follow-up to «ambassador» that of the dig in the earth harbor is «CDR», at the request of the prime minister and interior minister, be excluded instruct security forces to expel the staff and workers of the port of Beirut to protest against the strikers. Therefore, in the case is not resolved the dilemma of the transfer of waste to the port of Beirut, will not stay in front of concerned only three sites, namely: the area embankments in Biel, the land between the «Rivera Hotel» playground «Sports Club» in the Manara area, and the land along the «Center Islamic Cultural »real estate belonging to Horsh Beirut, and owned by the mayor of the capital! With the postponement of the announcement of the results of the tenders from yesterday to today, observers do not expect «any positive of all the movement played by the political parties to all, especially those intervening in finding solutions», but the sources of the Ministry of Environment confirmed for «ambassador», yesterday, that the results of tenders which will be announced today «will be more positive than expected, although the chances of success will not exceed 20 percent». Neutral environmental sources confirmed that the tender is non-transparent and fair, which was built on the Mhassat blatant conditions during the development of the notebook in the Cabinet, we will not be seeing the light after the announcement of the winners. She explained that it will be rejected from people around the sites selected, in addition to the rejection of most of the environmental and civil society associations that have already opposed the Cabinet decision number one famous, that «section Cheeses» among investors affiliated with the political parties, in the words of one environmental activists. I asked these sources: «Was it intentional access to this crisis in order to be passed Tenders haphazard?». Government sources indicated that the follow-up to choose the site in advance of Akkar «quietly option», pointing out that «most of the objections was conditional demands reasonable development can be achieved, especially if it has been committed technical and environmental conditions for the processing of the location». Other sources also talked about the new ideas are finally traded on the possibility of the transfer of waste to landfills equipped in Syrian territory! The union officials and workers of the port of Beirut, has announced the immediate strike and stop working and sit-in today and tomorrow, Thursday. The move came after the union said the bulldozers began work to collect waste in the capital, adjacent to the area of ​​the harbor near the highway. In addition, after the warnings and the Minister of Health, yesterday, he warned the chairman of the Health Committee in Parliament MP Atef Majdalani, of «health disaster threatening the Lebanese people as a result of the accumulation of waste and massive deployment of random dumps», stressing that «the need for the parliamentary Committee on the waste meets to make a decision.