Tired of gridlock, Lebanese look for a way out 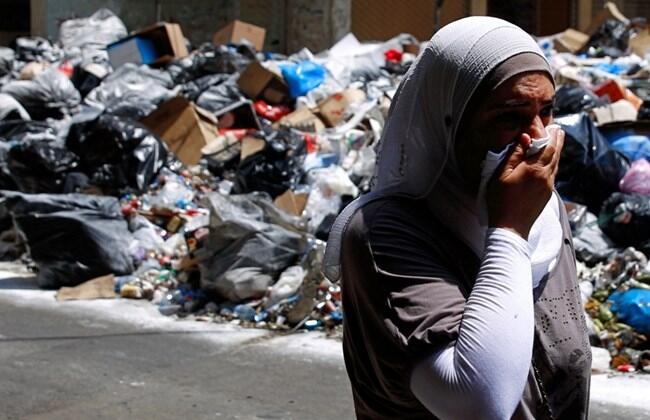 The garbage crisis, power rationing, the heat and the presidential vacuum – Lebanese have had a lot to cope with this year, and many say they are overwhelmed, disenchanted and looking for a way out. “Leave the garbage here, just arrange a way for us to leave the country,” Ziad Zangar cried to the amusement of his patrons at a café in Al-Tariq al-Jadideh. His sentiments reflect those of many Beirutis, who see no end to the challenges they must weather on a daily basis.
“We have no one to blame but ourselves,” said Maher al-Kalri, smoking nargileh in Tayyouneh. “We are idiots. We just work to eat and sectarianism has consumed people’s minds. The only common ground we have seems to be the nightclubs.” After the government, swayed by protestors, permanently closed down Beirut’s main Naameh landfill, an alternative waste-disposal site could not be found. The gridlocked Cabinet failed to take action and soon piles of smoldering rubbish lined Beirut’s thoroughfares. But despite the disillusionment, there remains a small margin of socially consciousness individuals who refuse to succumb to the status quo. Mohammad Hamad, an engineering graduate, devised a waste-sorting machine he called Waste Intelligent Sorting Equipment, or WISE. “The project is complete but we have no investors so we are unable to start production,” he said sullenly. “No one seems interested in investing in green solutions.” “We should be united in our suffering,” said Kamal Haddid, a legal adviser for Popular Aid Collective. Haddid stressed that the problems facing Lebanon were the result of a “creed of corruption” prevalent in the country since the Civil War. Protestors prepared to mobilize for a demonstration Wednesday to protest the government’s inept management of the trash crisis. The demonstration is the second step in a plan set out by Imad Akawi, the head of Popular Aid Collective, to reform the country’s public services. The first step involved a series of consultative meetings held with various NGOs and civil groups weeks ago. The discussions, however fruitful, failed to reach the ears of decision-makers. So Akawi opted for the second part of his plan. “We are marching to the Grand Serail to demand our rights, the implementation of various international treaties, the Lebanese Constitution and Law 144, which bequeaths Lebanese citizens the right to a healthy and safe environment,” he said. Next week Akawi will also meet with Beirut’s mayor, the governor and environment minister to press for the implementation of a law passed by Parliament in 2000 which permits the incineration of wastes. The law was never implemented. The collective, he said, considers finding a solution to the garbage crisis the first step in its activities to bring reform to the government’s public services. “I do not want my children to leave, this is our country and there is no reason we should not enjoy it,” he said. Haddid blamed the poor attendance of previous demonstrations calling for an end to the trash crisis on “politicians’ transformation of social problems into sectarian issues.” “That is how they keep us divided, and that is how they remain in power despite the atrocities they have committed” he said. “I call on all Lebanese to shed their almost instinctual sectarianism. The toxic fumes [from the garbage] you are inhaling do not care what your sect is.” Hadid and Akawi stressed that Wednesday’s demonstration will include individuals from all sects, and said it was primarily organized by Beirut-based NGOs. Mounifa Badreddine yelped while shopping in Ashrafieh when asked whether she would be joining the demonstration. “Of course I will join, I have a stomach virus because of the garbage but I will be the first one there,” she said. But not everyone was convinced anything would come of the protest. “What does it matter if I march toward the Grand Serail and demonstrate?” asked Mohammad Kesrwan, as his wife Mona nodded in approval from their perfumery in Al-Tariq al-Jadideh. “[The politician] does not care about me and never will, he has everything he needs in his palace so why would they listen to anything I have to say?” The sight of filth piling up on Beirut’s streets was the last straw for Freddy Haddad. “As Lebanese we are used to seeing ugly things on the street, but this is unacceptable,” he said, sipping coffee in one of Ashrafieh’s bustling cafes. “Ever since school egotism has been encouraged, we have no concept of teamwork we always have this mentality of another’s loss being my gain.” The Daily Star