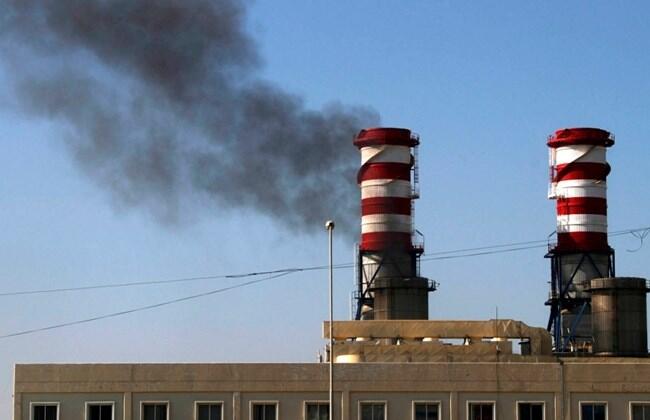 Lebanon has long suffered from electricity shortages, managing its limited supply with a combination of rationing and privately owned generator power. But the complete shutdown of the country’s second-largest power plant has led to widespread blackouts in the midst of a searing heat wave, angering affected residents.
For the past couple of days, most of the city of Beirut has experienced intense rolling blackouts. Such power outages are uncommon in the capital, where the power normally cuts for just three hours a day. Electricite du Liban has promised to find a solution, but the country’s moribund infrastructure has made a quick fix elusive. “The problem in the city of Beirut is partly due to the maintenance of the Zahrani power plant, but what’s more important is that areas of Beirut … get their power supply from a 220-kilovolt power line,” an EDL source told The Daily Star. “The Horsh-Aramoun line supplies power to the city of Beirut on this 220-kilovolt line. [Sometimes] this line reaches maximum capacity,” the source added. Most of the city is supplied with power from this 220-kilovolt network. The EDL source said that the rise in temperatures had increased the demand for electricity, pushing the line to full capacity. When this occurs, power rationing is inevitable. The Horsh-Aramoun line is named for the respective power stations it connects. All areas that receive power from the line have experienced power rationing in recent days. “The city of Beirut, and particularly areas receiving power supply from the 220-kilovolt network, are technically incapable of receiving power from other sources due to the incompletion of theMansourieh link,” the source added. A controversial project to install a high-tension electricity grid in Mansourieh has met opposition from local residents, who are concerned it would pose a health hazard. According to the source, the absence of the link affects the whole 220-kilovolt network. Unlike the rest of the country, most residents of Beirut don’t have access to generator power unless there is a generator specifically serving their building. Residents can’t subscribe to generator power networks as the practice was banned in the 1990s, on the assumption that the city wouldn’t experience power cuts. Ongoing maintenance at the Zahrani power plant has contributed to shortages in Beirut. EDL is working hard to overcome the issues at the plant, according to the source, and has explored all other options to replace its production. Damage was inflicted to one of the plant’s two gas units last month, requiring urgent maintenance. Its second gas unit had to be taken offline over the weekend, effectively shutting down the plant. South Lebanon has also been heavily hit by the cuts, which have hampered public services and infuriated citizens. In Sidon, Zahrani and Jezzine, talk of the blackouts and their impact on the water supply was on everyone’s lips. The Southern Lebanon Water Authority temporarily suspended the pumping of drinking water due to the cuts. In Sidon’s governmental Serail, employees at the Education and Personal Status Departments said the blackouts have made it difficult to complete paperwork. Angry residents demonstrated against the cuts in front EDL’s Sidonheadquarters Tuesday afternoon, demanding the right to electricity. “In this country, you get confused,” said Hazem Dali, who owns a grocery. “We were promised electricity production ships to compensate for the plant’s low production, but the result has been darkness amid the August heat.” Dali said he was angered, especially with the performance of politicians, saying it seems they cannot agree on anything. He was forced to throw away some of the dairy products he sells due to spoilage, explaining that even electricity from generators is now being rationed. High temperatures have exacerbated citizens’ misery during the cuts. Some, who could not stand the heat, spent time in their cars with the air conditioners running. “Inside the house, [we] can’t handle the temperature and the humidity,” Adnan Rifai said. “I couldn’t sleep, so I took my kid, turned on the car’s AC, and slept for a few hours.” Sidon remains under severe power rationing, and is receiving only four hours of electricity per day: two in the morning and two at night. The city usually receives eight hours a day. The electricity shortage will continue to the end of this week, The Daily Star has learned, until the maintenance work at the Zahrani plant has been successfully completed. The component needed to fix the damaged gas unit will be tested Thursday. In Zahrani’s coastal villages and towns, citizens are getting power for just two to four hours every six to eight hours. In upper Zahrani, Iqlim al-Tuffah and Jezzine, the situation is slightly better. But signs of a breakthrough in the water crisis are emerging. The Southern Lebanon Water Authority has resumed pumping drinking water from Sidon’s well to each of the city’s neighborhoods in turn. Working in collaboration with Sidon MP Bahia Hariri, the Water Authority revealed that it has located an old underground well, and is investigating whether it can be exploited for use in the city. A number of media outlets reported that power was briefly cut at the Rafik Hariri International Airport overnight Monday. Airport President Mohammad Shehabeddine issued a statement Tuesday to clarify what happened. “The lines that were supplying the airport with power were cut off at the same time at 1:45 a.m. early Tuesday morning. However, the lights were only off momentarily. With the use of the generators that supply the airport, the electricity at the airport is working normally.” The Daily Star