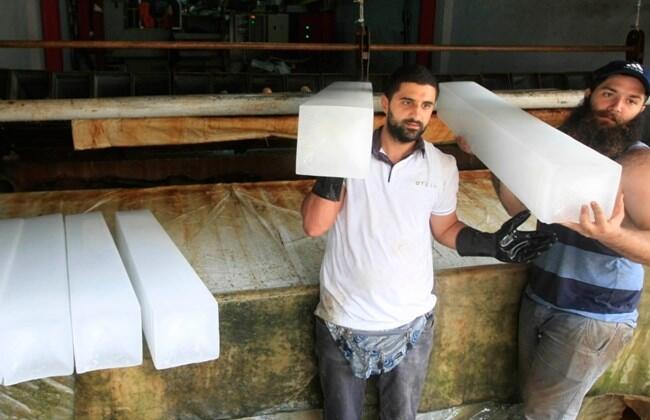 “Cool down with cold juice!” Issam Moussashouted as he pushed a cart of colorful, fresh juices through the southern city of Sidon. The bottles are kept on a thick block of ice to keep them cold in the sweltering heat.Ice blocks have long been popular among residents of Sidon. Afif Zaknoun recalled how he used to buy an ice block and wrap it with a bag. “We used to put the water jug on it to cool it.”
Moussa buys the blocks for his business from the Jalloul ice factory. “I come to the factory every day to buy ice blocks to cool the juice so that clients will enjoy it and be refreshed.” Moussa, who pays LL5,000 for each block, inherited the juice business from his father, who also purchased ice from the factory. In addition to the restaurants and fisheries it usually services, the Jalloul factory has been providing ice blocks to individual households during the current heat wave. Some areas have suffered excessive power rationing over the past week, pushing up demand. Poor families who cannot afford to pay for generator power buy ice from Jalloul to preserve their food. Some also purchase ice to help store the bodies of loved ones prior to burial. The factory was established in 1931 by the Qambris family, but is now owned by the Jallouls. Jamil Jalloul, who inherited the business from his father, worked to remove massive ice blocks from a cooling trough. “We modernized [the business] and moved it to the neighborhood of Taamir, where we built the factory,” he said. However, the security situation in the nearby Palestinian refugee camp of Ain al-Hilweh forced the family to move the factory to Sidon’s industrial zone, he added. The Jallouls have since opened a second factory in the nearby southern town of Sarafand, to service coastal areas and the city of Tyre, Jamil said as he carried a 120 centimeter ice block, weighing 25 kilos, and put it through an ice crusher. “It’s a tiring job,” he added. The production of ice is time intensive. “We have iron molds that we fill with water from artesian wells equipped with filters,” he explained. “We fill 19 molds and put them into the cooling troughs, where they need eight hours to turn to ice.” The factory produces 380 blocks a day, but with high temperatures and recurring power cuts, it is working overtime to satisfy orders. The Daily Star