Activists to act as ‘human shields’ in Naameh dump closure 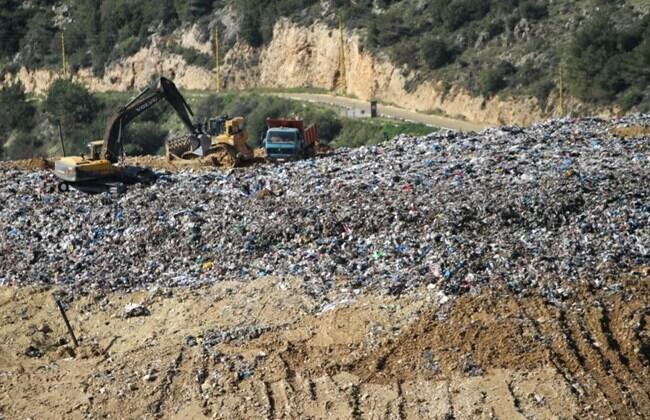 Activists Friday warned they would act as “human shields” to prevent any garbage trucks from entering the infamous Naamehlandfill in order to enforce the decision of its closure, signifying a trash crisis in Beirut and Mount Lebanon could be on the horizon.
“Garbage trucks will only enter Naameh landfill over our dead bodies,” said Ajwad Ayache from the campaign to “Close Naameh Landfill.” “We tell [Environment] Minister [Mohammad] Machnouk that the Naameh landfill’s days are over,” he vowed. In a statement published on the eve of Eid al-Fitr Thursday, Machnouk said he would close the Naameh landfill Friday and asked Sukleen, the region’s waste management contractor, to continue to collect and treat garbage but return the waste to each locality for disposal. Residents of Naameh and other Chouf areas have been demanding authorities close the overfilled landfill for years and had vowed to stage a sit-in Friday to make sure the decision to close the dump is carried out. Ayache said campaigners would hold an open-ended sit-in and even set up tents at the landfill’s gates “to make sure Naameh landfill remains shut.” Sukleen said before Machnouk’s announcement that in the event its trucks could not reach the landfill, the company would continue garbage collection until its warehouses reached capacity. Environmentalists were split over the developments, praising the decision to close Naameh landfill but warning authorities to now dispose of waste in a safe and environmentally friendly way. After Naameh closes, the Bsalim landfill will be the only sanitary one remaining in the Beirut and Mount Lebanon region. It currently receives 120 tons of waste per day. The Naameh landfill opened in 1998 as a component of the government’s Emergency Plan to close the Burj Hammoud dump. The plan was supposed to be provisionary, and the Naameh landfill was set to close in 2004. But successive governments kept postponing the date, and Sukleen overfilled the site far beyond any conceivable capacity. Originally appointed to receive 2 million tons of trash, Naameh has received over 15 million to date.
The Daily Star
&nbsp;