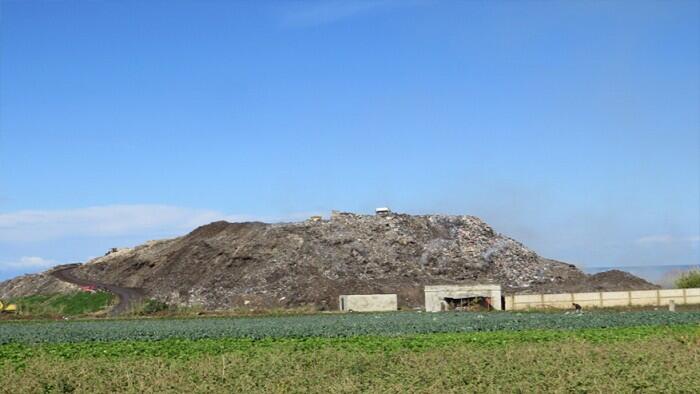 Mazen Haidar &nbsp; Ras Al-Ain waste landfill, located in a green spot, mediating the sea and the Ras Al-Ain natural pools, narrates old tales of suffering that go back to nearly twenty years and haunt the residents of the Southern coastal region of the city of Tyre, day and night. Not a single day passes, without the residents of the villages of Deir Qanoun, Ras Al-Ain, Al-Sama’ieh, Al-Shu`aytiyah, Al-Kneiseh, and Al-Rachidia, inhale the toxins carried by the fumes from the top of the landfill. Thousands of passersby also inhale these toxins, which cause cancerous and lung diseases, as many of the residents that are undergoing treatment due to the sickness caused by the landfill confirm, and the landfill now is the largest among all the other random landfills in Lebanon. The mentioned landfill is located on a piece of land which was rented from one of the residents of the area (Atef Chibli), and tens of tons of wastes are thrown in it on a daily basis, from Tyre and its towns, as well as the Palestinian refugees camps in the region (Al-Rachidia- Al-Bass, and Borj al-Chimali), in exchange of a monthly payment from the benefiting municipalities to the owner of the land, each depending on its size, until the landfill, which extended a few acres to the territory of Tyre Nature Reserve, became a landmark which can be viewed accompanied by its smoke from all sides. In an attempt to get rid of the landfill, a factory for sorting out wastes was established nearly five years ago in the town of Ain Baal, and the project was funded by USAID, the Ministry of Administrative Development, and the Union of Municipalities of Tyre, which is currently in charge of the management and operation of the plant, where about a hundred and twenty tons are sorted per day, but the establishment of the plant, which faced many obstacles due to its high cost, did not solve the problem, since its operational capacity does not exceed 150 tons, while Tyre and the 62 municipalities in the region produce more than 300 tons of waste altogether, and this fact necessitated the continuity of Ras Al-Ain landfill’s works, along with other random dumps for several towns in the region, as well as returning part of the sorted wastes from Ain-Baal plant to the landfill as a result of the lack of adoption of “hosting” a landfill for exhausts from any town or village within the Union on its ground, where the Union is currently paying an annual amount of 180 million Lebanese Pounds to the owner of the piece of land, in return of throwing these exhausts in the landfill. After many complaints from the citizens, the Governor of the South Mansour Daou requested of the Union of Tyre Municipalities, through a letter to Tyre’s Administrative District, to close the landfill immediately, citing the reasons of danger to groundwater, in addition to causing several health and environmental problems.

Despite the letter, this landfill is still operating at full capacity, and while all the concerned parties, particularly the municipality of Deir Qanoun Ras Al-Ain law, which the landfill is located within its real estate scope, confirm the damages caused by the landfill and its future risks, but there are no signs of a solution to get rid of the landfill, due to the absence of a piece of land where the landfill could be established in any of the towns of the region, and in this context, sources from Tyre municipality indicated the existence of a proposal for the establishment of an exhaust landfill in the same spot where the wastes are thrown, if it was expropriated with neighboring land, added to it some acres from the Nature Reserve’s Lands, after the approval of the competent authorities. The head of Deir Qanoun Ras Al-Ain Municipality, the Engineer Haitham Ismail, points that the municipality, which was established only ten years ago, has inherited this landfill which dates back to about twenty years. He adds: “No one disagrees on the nightmare of the existence of this landfill in which the wastes of the city of Tyre are thrown in, along with those of the refugee camps and of more than 23 towns and villages, in addition to the exhausts that are brought from the waste sorting plant in the town of Ain Baal”. Ismail says: “The Municipality of Deir Qanoun Ras Al-Ain has stopped the works in the landfill about five years ago, but the result was the spread of indiscriminate wastes in Tyre and all the towns of the region, which exacerbated the environmental problem and the concerned parties, especially the Ministry of Environment, which requested to find an alternative solution, prior to the closure of the landfill and the disposal of large amounts of wastes. He pointed to the presence of hopes in this regard, through the allocated financing for the landfill from the budget of the overall plan for waste management in Lebanon, within which a landfill in the region may be established. Translated by: Zeina Nasser &nbsp;