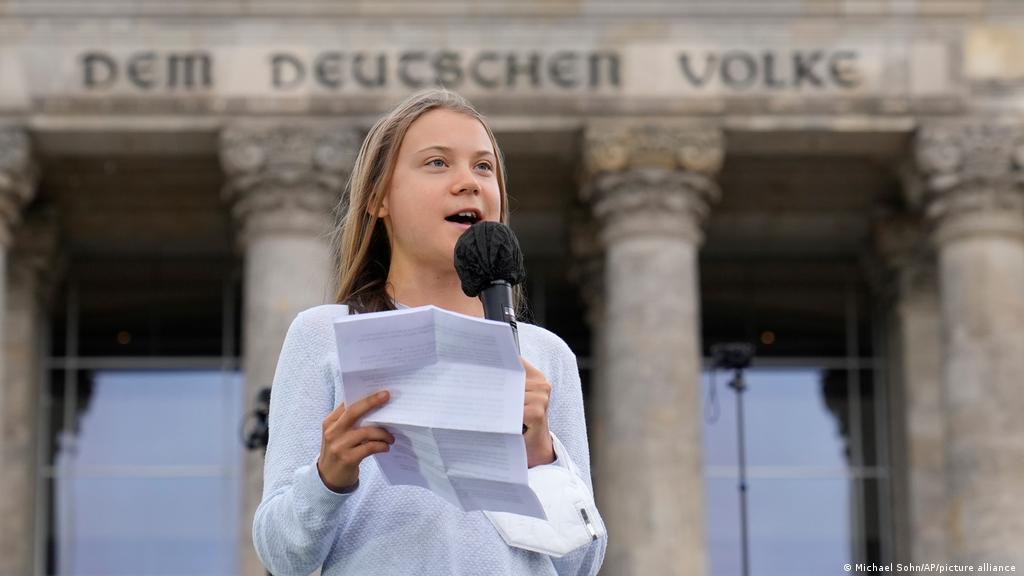 Greta Thunberg has made a surprise appearance at Glastonbury, to warn of the dangers of climate change.

The earth’s biosphere is “not just changing, it is destabilising, it is breaking down,” the 19-year-old told festival-goers from the Pyramid Stage.

She criticised world leaders for “creating loopholes” to protect firms whose emissions cause climate change.

“That is a moral decision… that will put the entire living planet at risk”, she added.

But she ended on a message of hope, telling festival-goers they had the power to make a difference.

“We are capable of the most incredible things,” she said. “Once we are given the full story… we will know what to do. There is still time to choose a new path, to step back from the cliff.

“Instead of looking for hope, start creating that hope yourself.

“Make no mistake, no-one else is going to do this for us,” she concluded. “Right here and now is where we stand our ground.”

Thunberg was introduced on stage by Glastonbury organiser Emily Eavis, who called her “the most inspirational speaker of her generation.”

The activist spoke against a backdrop of the “warming stripes”, a vivid illustration of how the average global temperature has soared in recent decades.

Her appearance was warmly received by the crowd, who joined her in a chant of “climate justice” at the end of her speech.

Thunberg’s speech comes three years after Sir David Attenborough made a cameo on the Pyramid Stage.

The broadcaster thanked festival-goers for cutting their plastic use, after organisers banned single-use plastic bottles.

Grenfell plea
Thunberg spoke after an invigorating performance from rapper AJ Tracey, who opened his set with a powerful, angry message about the Grenfell Tower disaster.

In a pre-recorded video, the West London musician accused those responsible for the fire of “hiding behind a legal framework”, while young black men were being “arrested and convicted every day with haste for acts a lot less significant”.
“The worst thing of the whole situation is [that] Grenfell could happen again,” he continued.

“Our buildings are not safe and thousands of low-income people, people who grew up just like I did, go to bed every night not knowing if it’ll be their last. They tuck their children in at night and don’t know if they’ll wake up in flames.”

Tracey, who grew up in Ladbroke Grove, knows many of the victims, survivors and bereaved.

He ended his message by addressing the Prime Minister directly.

“Boris Johnson, I want to ask you a question: 72 of our friends and family are dead and there’s been zero arrests,” he said. “Why?”

The rapper went on to perform a muscular set of hip-hop, grime and 2-step, rearranging many of his songs to work with a live band.

“I’m hoping that the crowd are receptive to me trying to give them a different take on my usual set,” he told BBC News ahead of the performance.

He said his musical versatility came from his upbringing.

“My dad used to be a rapper, my mum used to be a DJ on the radio, playing jungle, house, garage… so I’ve got quite a mix.

“My mum’s Welsh and my dad’s from Trinidad – so the British sounds and the Caribbean sounds come into one, and I’ve been inspired by it.”

The star brought his mother to Glastonbury and she watched his show from the side of the Pyramid stage.

“She’s going to be rocking out, man. She’s my biggest fan,” he said.

“She doesn’t have a scrapbook but she’s a photographer so she takes loads of personal pictures and has her own little personal archive.”

Paul McCartney will headline the festival later on Saturday night, and is scheduled to play a marathon two-and-three-quarter hour set.

Fans arrived at the barriers in front of the Pyramid stage early on Saturday morning to make sure they had a front row seat for the show.