Cody Rhodes Returns to WWE at WrestleMania 38, Says He Is ‘Completely Different Individual’ 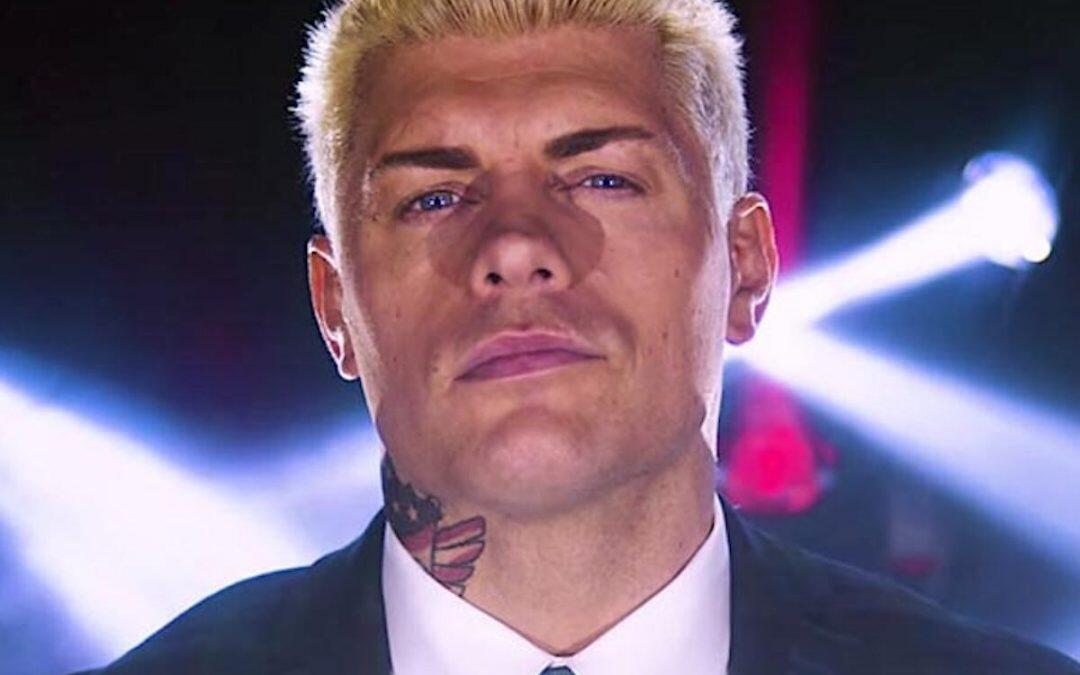 Cody Rhodes made his return to WWE on Saturday night at WrestleMania 38, coming back to the promotion that he famously exited nearly six years ago.

In that time, Rhodes has wrestled all over the world and was integral to the founding of All Elite Wrestling (AEW), the rival wrestling promotion run by Tony Khan. Rhodes was a top star onscreen and an executive vice president offscreen in AEW, but he left the company in February 2022 after failing to come to terms on a new contract.

In an interview with Variety in the days leading up to WrestleMania, Rhodes said his dream is still to do what his father — the legendary Dusty Rhodes — never did. He won’t say it out loud for fear of jinxing it, but Rhodes has his eyes on the WWE Championship. Dusty fought for the title in 1977 at Madison Square Garden against Superstar Billy Graham for what was then the WWWF title but never won it.
“He went to Madison Square Garden, stood across from Superstar Billy Graham and he held it in his hands, the goal of mine, and it was taken away because that was the context of the match,” Rhodes said. “I understand that now as an adult, but as a kid, that was the only reason I ever wanted to get in, so that I could get what he didn’t get.”

He also revealed that there is a Dusty Rhodes documentary in the works as part of WWE’s partnership with A&E under the “Biography: WWE Legends” banner. Past wrestling greats profiled in the series include Bret Hart, “Macho Man” Randy Savage and “Stone Cold” Steve Austin.
How does it feel knowing you’re not only coming back to WWE, but coming back at WrestleMania?

Everyone who knows has asked me how I’m feeling, if I’m really excited. The answer I kind of keep giving everybody is it’s just a really heavy feeling. When I first got into wrestling, I was solely in the WWE system, and I had that dream of getting to the top. Then dreams are like rivers, as the Garth Brooks song says, and it veered and it changed. Then we were able to do what we were able to do with AEW and that’s something that I’m very proud of, but to be able to revisit the thing that I set out to do in the first place when I didn’t think I would get that chance is just heavy.

Even now, thinking about it is heavy. So yeah, all the feelings — happy, excited, pressure, responsibility, all of it. But I don’t know how I will feel until I’m out there. It just seems like kind of a culmination of my whole career, but I don’t want to jinx it. I don’t want to put any hyperbole there, but it’s the biggest crowd in wrestling. It’s returning as me in something that I built and nobody else built. And that’s the ultimate vindication.

You’ve been gone for almost six years. Do you feel as though you’re a completely different performer than when you left?

I told Vince McMahon, Bruce Prichard and Nick Khan — this very small circle of individuals — I told them what I truly believe and it’s that I’m the best wrestler in the world. And to go further with it, I actually don’t think there’s a close second. But with that said, the opportunity now exists to prove it, and that’s what I’m most excited about.

It’s a completely different individual returning to the game. It’s a different brand. It’s someone who’s experienced all the wonders of independent wrestling, of traveling internationally, of being able to get on the ground with the fans that make this whole ship move. But different person or not, I’m still that little kid that I mentioned in an AEW promo that wants what my dad didn’t get, and I’m not going to say it out loud because I don’t want to jinx it. But, you know, he went to Madison Square Garden, stood across from Superstar Billy Graham and he held it in his hands, the goal of mine, and it was taken away because that was the context of the match. I understand that now as an adult, but as a kid, that was the only reason I ever wanted to get in, so that I could get what he didn’t get.

And of course, everyone wants to know about the details around your departure from AEW.

I chose to remain silent about my departure from AEW and I’m going to keep my word on that. There’s no shoot interview. There’s no nefarious tale that’s going to be told. There were all these different theories and none of them are correct. I mean, there were things about money and creative control. They were printed as fact and it’s been a very difficult two months to see that, when the reality is it was just time. It was a personal matter and we couldn’t move past it. I have nothing but respect for Matt [Jackson], Nick [Jackson] and Kenny [Omega]. I’m rooting for Tony Khan. His name is going to be in the history books as someone who helped to bankroll and support this entire alternative and revolution that AEW became but for me, it was just time to to move on. I get an opportunity at my dream, I get another chance at it. And you really can’t leave any stone unturned with that.

Given all you’ve done since you left WWE, what do you feel is the biggest lesson you learned that you’re carrying into Saturday night?

I think the elusive thing for any wrestler to find is the connection with the audience. You can look like Lex Luger. You can wrestle like Bret Hart. But the thing that matters the most and what defines a pro wrestler for me is your ability to capture their imagination. That means they leave that show thinking about you, talking about you, discussing whether it was good or whether it was bad. When you get a hold of that, it’s like a dog with a bone. You can never let it go. I didn’t find that connection until 2015, 2016 until the infamous betting on myself, you know?

All of those independent shows, I don’t remember the matches. I mean, sure I had fun and I met some great people but I remember the silly long meet and greets and the stories and the universal bonding over my father that so many fans did with me. That’s the thing I carry into this. I’m in far, far better shape. I’m in the best shape of my career. Again, I don’t think anyone can touch me bell to bell. And I mean that. It sounds braggadocious but it’s just I’m confident in what I can do. But the No. 1 thing I am able to carry with me is that connection to the audience. Because that’s what drives drives the game. And that was something I went out and got on my own and again, don’t want to let it go.

And will you still be known as The American Nightmare in WWE?

Yeah. I mean, there should be no difference. To quote some of these individuals who courted me for this moment, “It’s not broke.” And this was a place that didn’t care for me. And it wasn’t that they didn’t have love and respect for me but as a wrestler, I wasn’t considered their most desirable. If anything, I was kind of undesirable. That’s where the whole mantra comes from, the whole promo of “desirable to undeniable,” to be able to return on your terms. It kind of feels like being in the military and having conquered something or having won this battle and being able to stand and keep your chin parallel with the floor and to be able to come in that fashion, a bit of a conquering hero. That’s how I see it in my dreams.

Incredible. Thank you so much for speaking with me today, Cody.

I also just wanted to share with you because I haven’t been able to share with anyone, I’m really excited that A&E is doing a documentary on my dad. To be able to be the executive producer on it and not have that even be in question and to be able to coordinate people who really were in his life and to tell his story, that’s a big part of this journey as well. To see that and have that crew there as well. Part of his journey is part of mine.

And I’m excited to bring the WWWF championship belt that I acquired a few months ago, the one that Superstar and Dusty

Where did you get that?

fought over. I’m excited to carry that in my bag.

Believe it or not — I bet you he doesn’t want me to say his name, but it’s funny. Dan Lambert. He handed it to me for no money and said “I thought it should belong to you.”