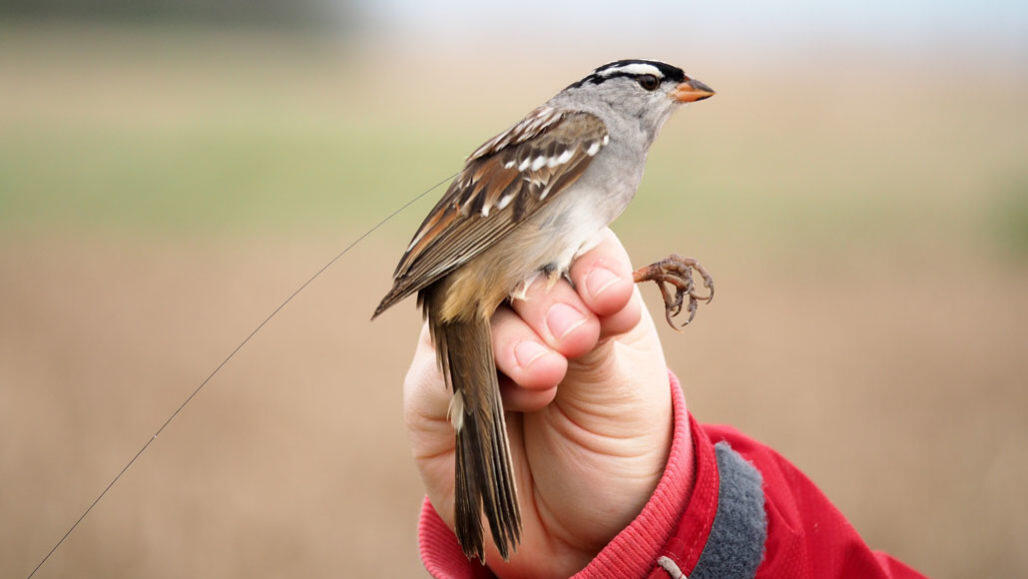 The world’s most widely used insecticides may delay the migrations of songbirds and hurt their chances of mating.

In the first experiment to track the effects of a neonicotinoid on birds in the wild, scientists captured 24 white-crowned sparrows as they migrated north from Mexico and the southern United States to Canada and Alaska. The team fed half of those birds with a low dose of the commonly used agricultural insecticide imidacloprid and the other half with a slightly higher dose. An additional 12 birds were captured and dosed with sunflower oil, but no pesticide.

Within hours, the dosed birds began to lose weight and ate less food, researchers report in the Sept. 13 Science. Birds given the higher amount of imidacloprid (3.9 milligrams per kilogram of body mass) lost 6 percent of their body mass within six hours. That’s about 1.6 grams for an average bird weighing 27 grams. Tracking the birds (Zonotrichia leucophrys) revealed that the pesticide-treated sparrows also lagged behind the others when continuing their migration to their summer mating grounds.

The findings suggest that neonicotinoid insecticides, already implicated in dropping bee populations, could also have a hand in the decline of songbird populations across North America. From 1966 to 2013, the populations of nearly three-quartersof farmland bird species across the continent have precipitously dropped.

The researchers dosed the birds in the lab with carefully measured amounts of pesticide mixed with sunflower oil. In the wild, birds might feed on seeds coated with imidacloprid. The highest dose that “we gave each bird is the equivalent of if they ate one-tenth of [a single] pesticide-coated corn seed,” says Christy Morrissey, a biologist at the University of Saskatchewan in Saskatoon, Canada. “Frankly, these were minuscule doses we gave the birds.”

After observing the birds in the lab, Morrissey and colleagues tagged the fliers with lightweight trackers and kept tabs as the sparrows continued their spring migration. The highest-dosed birds stayed a median of 3.5 days longer near the site where they were captured — possibly to recover and regain strength — than birds that weren’t dosed with the pesticide. Birds given the lower dose of pesticide (1.2 milligrams per kilogram of body mass) stuck around for a median of three days, and those that weren’t dosed with pesticides flew away after half a day.

“Given that we’ve been seeing increasing evidence that these pesticides harm pollinators and insects, I can’t say I’m shocked or surprised that they also have an effect on birds,” says Melissa Perry, an environmental and occupational health scientist at George Washington University in Washington, D.C., who wasn’t involved with the study.

Much of the research on neonicotinoids, which have chemical similarities to nicotine, has focused on their effect on beneficial insects, such as bees which play a key role in plant pollination (SN: 7/26/16). Scientists are just beginning to evaluate the pesticides’ impact on vertebrates, Perry says.

“When this type of pesticide was first introduced, they were offered as an alternative to insecticides that were more toxic,” Perry says. “I don’t think we ever really anticipated the environmental impact of neonicotinoids.”

Outdoor use of imidacloprid and two other neonicotinoid pesticides is banned in the European Union, but the pesticides are still widely used in the United States (SN: 6/10/19).

Unlike DDT — an older type of insecticide developed in the 1940s and now banned in the United States that can accumulate in the environment and persist for decades — neonicotinoids are quicker to break down, says study coauthor Margaret Eng, a toxicologist also at the University of Saskatchewan.

It does seem that after resting for a few days, the birds dosed with the pesticide were able to resume their migration, Eng says. “But there’s still a lot we don’t know about how repeated exposures to the pesticides might affect a bird.”