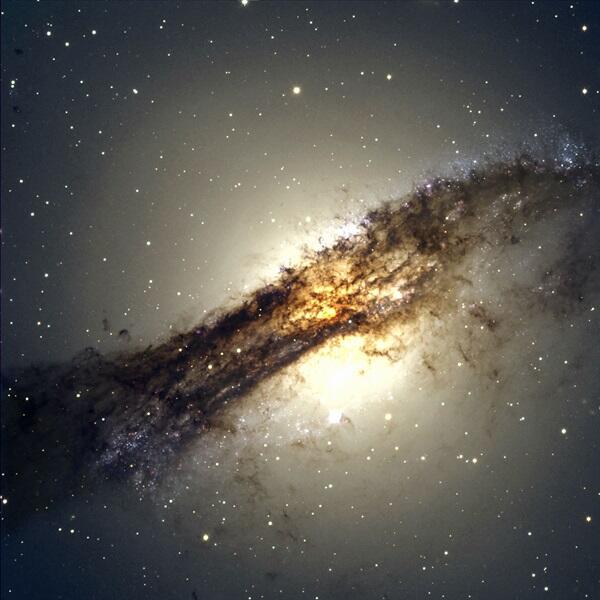 The force of gravity locks smaller things in place around big ones. This holds true for galaxies, including our own, which maintain systems of satellite galaxies (for example, our Large and Small Magellanic Clouds). While the current standard cosmological model used by astronomers to describe and understand the universe states that these satellites should be randomly distributed and orbit around their parent galaxy in a disorderly fashion, new observations have just shown, for the third time, that this is not the case.

The results, published today in Science, show that the satellite galaxies surrounding Centaurus A, a well-known and relatively nearby galaxy 13 million light-years away, are orbiting not only in a single plane, but in a nice, orderly fashion as well. Such observations confirm what astronomers have already seen around our own Milky Way and the Andromeda Galaxy, but fly in the face of the standard cosmological model, which say that such systems should be rare — as in, 0.5 percent of galaxies. But at three for three, astronomers have seen it in 100 percent of systems, instead.

Of course, outliers that don’t follow the model’s predictions should exist. And three systems is still an extremely small number — but even so few observations now show that satellites are much more likely to orbit in an orderly fashion than believed. It’s looking like the standard cosmological model, which states that galaxies are largely made up of dark matter, may need some tweaks. “Coherent movement seems to be a universal phenomenon that demands new explanations,” said Oliver Müller of the University of Basel in Switzerland, and lead author of the study, in a press release.

The ultimate conclusion is that it’s common for satellite galaxies to move together — not randomly, as dark matter models predict. But while these results put added force behind a blow to our current understanding of dark matter, they don’t necessarily mean that dark matter is no more. What they do mean, however, is that our understanding of the way dark matter interacts with the universe may not be completely correct — which makes sense, given that we’ve yet to detect it directly. Challenges to current models are the best way to hone and improve those models, pushing them to better match the universe as we make new discoveries and uncover new pieces of the puzzle.
Source: http://bit.ly/2BOmz1G