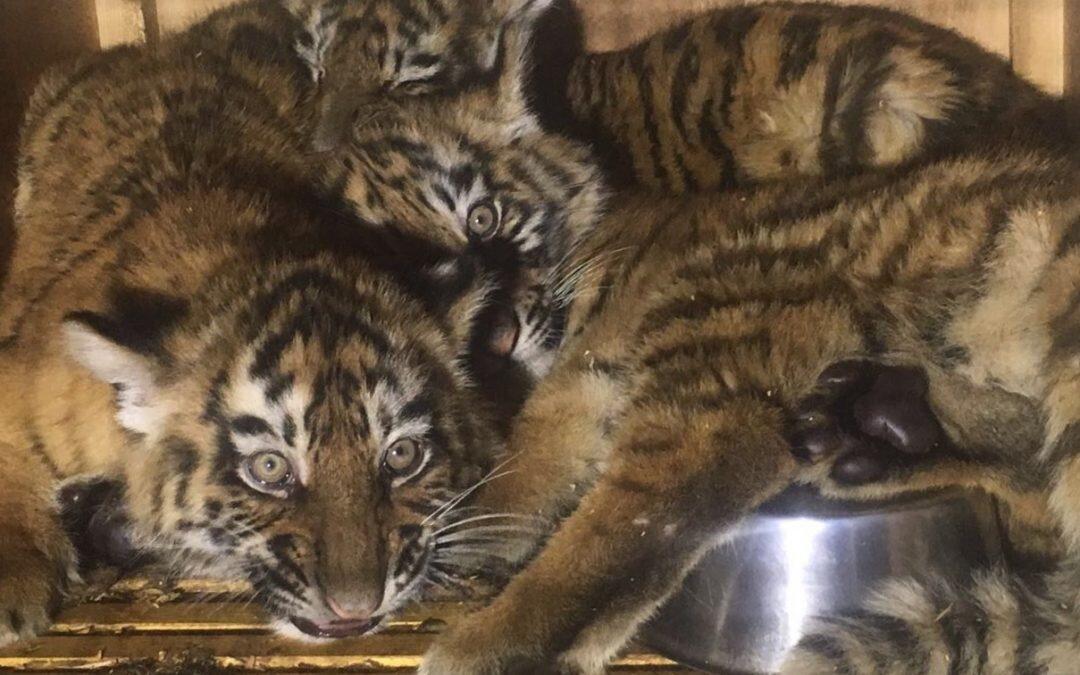 Three baby tigers trapped at the Beirut airport after arriving from Ukraine were freed after seven days by Judges order.

The months old Siberian tigers were destined for Syria but held at customs. Animal welfare organization Animals Lebanon petitioned judge of urgent matters of Baabda, Mr.Hasan Hamda to free the animals because of significant concerns for their health and welfare.

The world is dealing with an unprecedented spike in illegal wildlife trade, threatening to overturn decades of conservation gains. Ivory estimated to weigh more than 23 metric tons—a figure that represents 2,500 elephants—was seized in the 13 largest seizures of illegal ivory in 2011. Poaching threatens the last of our wild tigers that number around 3,890.
Wildlife crime is a big business. Run by dangerous international networks, wildlife and animal parts are trafficked much like illegal drugs and arms. By its very nature, it is almost impossible to obtain reliable figures for the value of illegal wildlife trade.

“It took the combined efforts of the Ministry of Agriculture, Customs, and a judge to stop this shipment,” said Lana El-Khalil, President of Animals Lebanon. “It is completely unacceptable that these animals have been trapped for seven days in a cage which is soaked in feces and urine, too small for them to stand, and infested with maggots.”

Most of the animals come to the country, from Ukraine and Syria. The ones from Ukraine go through Beirut’s international airport. The three baby tigers arrived there, and held up at the airport for ten years. These animals end up getting imported legally just by having “live animals” on the travel documents, without any mention of the fact that they are wild animals.

Lebanon joined the Convention on International Trade in Endangered Species (CITES) which regulated the trade of tigers and other endangered species in 2013 and the Ministry of Agriculture recently issued a decision to better protect big cats.

“The animals are incredibly stressed and scared,” continued El-Khalil. “We are doing all we can to make sure they survive, and thankful the government has said this is unacceptable and determined to meet our national and international obligations.” Over the last year lions, tigers, and leopards have been trafficked into Lebanon and kept as exotic pets or in private zoos, often sold for $10,000 or more.

On November 2014, Ministry of Agriculture referred the Animal Protection and Welfare Bill to the Council of Ministers, three years after it was first submitted by Animals Lebanon and undergoing thorough review by a committee charged by the ministry to present remarks and recommendations.

The bill ultimately aims to establish a comprehensive system aimed at protecting animals and ensuring their welfare, while limiting cases during which it is allowed to inflict pain or subject them to danger or torture. The bill sets in place general guidelines regarding the treatment of animals, regulates the establishments that use animals, and punishes violators in compliance with international conventions, mainly the Convention on International Trade in Endangered Species of Wild Fauna and Flora (CITES) and the recommendations issued by the World Organization for Animal Health.

Lebanon currently lacks legislation to provide legal protection for animals, except for a small number of articles mentioned in the penal code and provisions stipulated in a legislative decree pertaining to sites classified as hazardous, dangerous to public health or causing a nuisance, and in other resolutions issued decades ago that no longer apply to the current situation on the ground.

In fact, the Animal Protection Law is an integral part of a comprehensive legislative initiative aimed at guaranteeing food safety, whether through the food safety law or other legislative and administrative resolutions issued by local municipalities or governorates. The law creates criteria that the establishments subjected to this law, such as farms and slaughterhouses, have to meet, which include suitable heating, lighting, ventilation and humidity equipment, in addition to committing to safety, preserving public peace, hygiene, and other environmental conditions, using the adequate infrastructure to provide animals with food and water, and establishing a quarantine for sick and injured animals in order to prevent the spread of diseases.

The bill also includes an article regulating animal transport, which calls for complying with IATA regulations during live animal aerial shipments, and complying with the recommendations of the World Organization for Animal Health when transporting animals by sea or land, in addition to using the most appropriate means of loading and unloading, transportation and providing veterinary procedures during import, export, and transit.