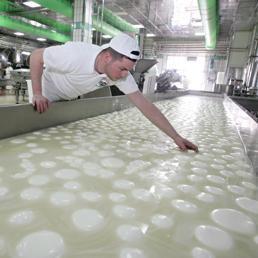 Central and southern Italy lead the growth in companies in the DOP and IGP “protected origin” food and wine universe, according to the annual ISTAT report on quality agri-food products.

Among individual sectors, the one that counts the greatest number of companies, again, is cheese (also thanks to veritable ‘DOP giants’ like Parmigiano Reggiano, Grana Padano, Gorgonzola, Asiago and Buffalo Mozzarella from Campania, Mozzarella di Bufala Campana): 27,042 workers (though down by 3.1%).

The cheese segment is also the one that’s seen the greatest number of dropouts: 412 farmers have left the certified system over the past year.

Ranking second in number of operatives is the olive oil segment, which totals 20,327, though the sector is extremely fragmented, with a turnover far below that of the dairy sector.

In terms of number of appellations, Italy firmly maintains its leadership in Europe, and the top sectors are fruit, vegetables and cereals (106 products), cheeses (51 certified appellations), extra virgin olive oil (43) and meat preparations (40).

“Over three quarters of producers operate in mountain and hillside areas, which shows the DOP and IGP system’s major role in safeguarding territory in the inland areas,” reads the report.

On the geographical level, over half of producers is concentrated in three regions, Sardinia (19.7%), Tuscany (17%) and Trentino Alto Adige (15.5%), respectively specializing in the dairy sector, olives and olive oils, and fruit.