Madrid Turns to Archers to Solve Its Wild Boar Problem 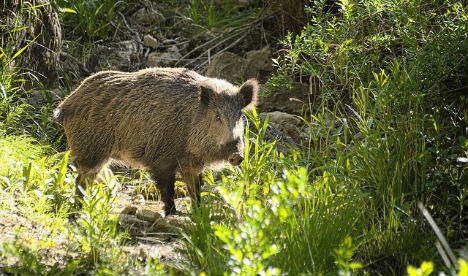 It’s a scene straight out of medieval times set in modern-day Madrid: an archer dressed in camouflage gear, stationed in a tree at night, waiting for the kill.

For five years, the authorities in the region have resorted to this unusual technique to cull wild boars encroaching on towns, relying on 55 volunteer bow hunters to eliminate pigs that take too much of a liking to urban life.

“The bow is a silent weapon and people who use it act in a silent way too, so we don’t disturb the environment or people,” explains Emilio de la Cruz, a 45-year-old business owner and keen hunter who volunteers for this form of population control.

The method is just one used to try and curb the proliferation of wild boar going further and further into populated areas, causing agricultural damage and road accidents.

But the method is not without its controversy, with environmentalists arguing that the animal can suffer an agonizing death if the archer takes a bad shot.

In some countries such as Britain, bow hunting is banned altogether.

De la Cruz maintains that he and his hunting companions are all experienced, trained to shoot the arrow through the boar’s vital organs in a quick, clean kill.

Standing at a training ground in the rolling hills outside Madrid, a boar-shaped target in the background, he says the archers go out 100 to 150 times a year at the request of city or town halls in the region.

In five years, they have killed 201 boars and close to 60 wild goats that have proliferated in La Pedriza, a mountain range near the Spanish capital popular with hikers and climbers.

When asked to intervene, the hunters first study the zone to analyse the boars’ movements, set up shop in trees or other elevated places at night, wait — sometimes for hours — and take aim.

They hunt in parks, golf courses or any area close to a town or city where boars have been spotted roaming free, giving the odd late-night jogger a shock.

The problem of wild boars running riot in populated zones affects countries the world over, in large part due to rampant urbanization that has gobbled up their habitat.

As an example, a wild boar in Hong Kong led police on a chase last month after it wandered onto the apron of the international airport.

“They’ve grown used to the presence of people, to eating in rubbish bins and some people even give them food,” says Felipe Ruza, deputy head of environmental conservation for the Madrid region.

“This causes problems because they invade gardens, cause traffic accidents and they can even attack people if there is a sow with her piglets.”

According to the Guardia Civil police force, 146 traffic accidents were caused by boars in the Madrid region in 2016, none of them fatal.

Theo Oberhuber, head of nature conservation at environmental group Ecologists in Action, adds that a lack of predators such as wolves is also to blame.

“In Madrid, the wolf is now protected but it was once wiped out in the Madrid region due to the use of poison, traps,” he says.

“Now wolves are coming back, but there aren’t that many.”

While not commonplace, resorting to archers as a population control method is not exclusive to Spain.

Eric de Lavenne, head of the French Bow Hunters’ Federation, says archers have been used in several parts of France.

“The La Fleche Airport in the Sarthe (region) regularly calls on bow hunters to control the number of boars near the airport,” he says as an example.

Another method used in Madrid is capturing boars alive in traps in areas where bow hunting cannot take place.

There are no statistics indicating whether either technique is successful, but de la Cruz says he has noted a difference.

“Where at first we had to kill animals, now with our mere presence or the presence of other people, animals don’t come anymore. That is our success,” he says.

Oberhuber, though, is skeptical.

He points to yet another technique that is being trialed in the northeastern region of Catalonia and involves putting contraceptives in boars’ food to reduce their capacity to reproduce.

“This could be an unaggressive method that doesn’t cause death and progressively reduces the number of boars,” he says.