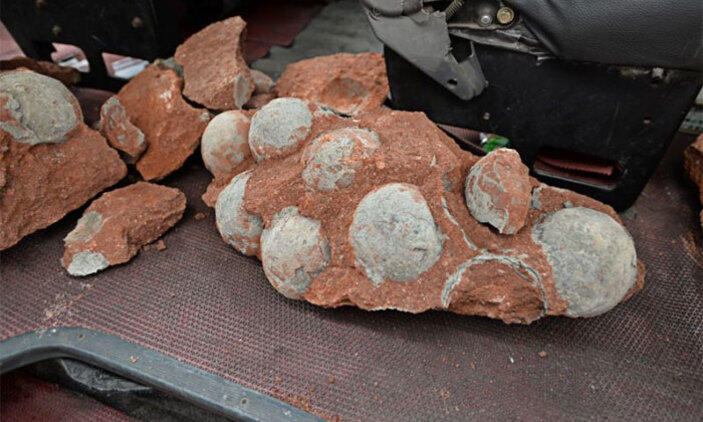 Dinosaur egg fossils, certain types of which researchers say might have different incubation periods than previously understood, found on a construction site in China’s Guangdong province.

The eggs of nonavian dinosaurs took three to six months to hatch, a long incubation period that could help explain dinosaurs’ mass extinction 65 million years ago, according to new research.

Findings published Monday in the Proceedings of the National Academy of Sciences show that nonavian dinosaur incubation mirrored that of reptiles — a prolonged time before hatching that could have impacted dinosaurs’ ability to compete with other animal populations that were breeding faster.

Many researchers previously assumed both nonavian and avian dinosaurs’ incubation length was more in line with today’s birds, whose eggs hatch in 11 to 85 days.

Scientists conducted the study by using a high-definition microscope to examine the growth lines on the fossilized teeth of two rare, well-preserved nonavian dinosaur embryos.

“These are the lines that are laid down when any animal’s teeth develops,” said Gregory Erickson, a Florida State University professor and one of the study’s lead authors. “They’re kind of like tree rings, but they’re put down daily.

“We could literally count them to see how long each dinosaur had been developing.”

From their observations of the growth lines they determined how old the two embryos were when they died — three and six months, respectively.

The findings indicate that birds — living descendants of avian dinosaurs — likely evolved quicker incubation rates after branching off from other types of dinosaurs.

That development gave birds an advantage to survive predators as well as environmental disasters like flooding or drought — as well as catastrophes like the one that killed off the dinosaurs.