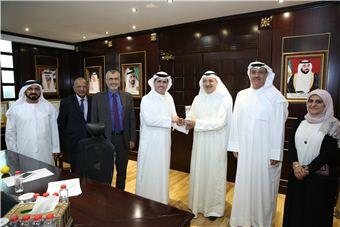 Al Tayer welcomed the delegation, stressing DEWA’s ongoing commitment to enhance collaboration with the most important local and international companies, to improve the renewable and clean energy sector, and achieve sustainable development and green economy. Al Tayer highlighted Dubai’s efforts to develop the renewable and alternative energy sector, while conserving natural resources and finding alternative methods to traditional energy, to achieve sustainable development in the Emirate.

DEWA has launched several projects and initiatives to achieve the vision of Sheikh Mohammed bin Rashid Al Maktoum, Vice President and Prime Minister of the UAE and Ruler of Dubai, who launched the Dubai Clean Energy Strategy 2050, to transform Dubai into the city with the lowest carbon footprint in the world by 2050, and achieve the Carbon Abatement Strategy which aims to reduce carbon emissions by 16% by 2021. The Dubai Clean Energy Strategy aims to diversify the energy mix so clean energy will generate 7% of Dubai’s total power output by 2020, 25% by 2030 and 75% by 2050. One of the most important projects launched to support the strategy, is the Mohammed bin Rashid Al Maktoum Solar Park, which is the largest single-site solar park in the world. It has a planned capacity of 5,000 megawatts (MW) by 2030, and will help reduce 6.5 million tonnes of carbon emissions by 2030, supporting the green initiatives and programmes carried out by the government to reduce carbon emissions.

Al Tayer noted that one of the successes that DEWA has achieved in this area, is receiving a globally-competitive price of USD 2.99 cents per kilowatt hour (kWh), for the Mohammed bin Rashid Al Maktoum Solar Park’s 800MW third phase. This demonstrates the trust that international investors have both in Dubai and in DEWA, and is a testament of transparency in DEWA’s projects, and its strong financial position. Al Tayer noted that DEWA adopted the Independent Power Producer (IPP) model to fund the first phases of the Mohammed bin Rashid Al Maktoum Solar Park. Going forward with the launch of the Dubai Green Fund will attract investments and strengthen private and public partnerships (PPP) to support future green projects and solutions. Al Tayer said that governments have a key role to play in strengthening national policy and regulatory frameworks, facilitating the environment, having incentives to attract private funds and investments to support a sustainable green economy.

Towards the end of their visit, the delegation from KNPC thanked Al Tayer for his hospitality and commended DEWA on its efforts to provide electricity services based on the highest standards of accountability, reliability, and efficiency, to achieve sustainable development, and enhance innovative clean and renewable energy projects.