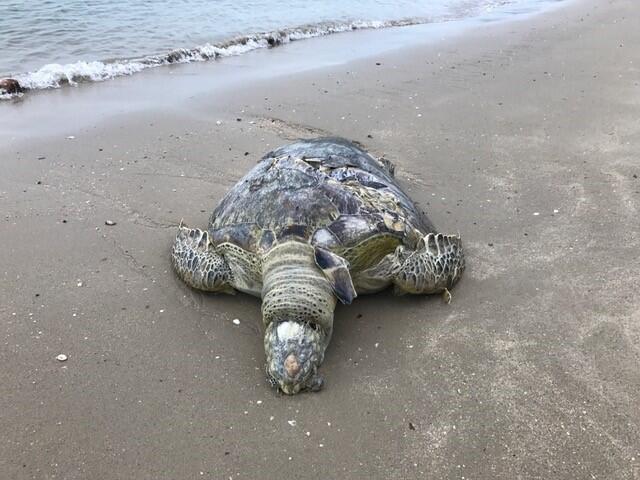 The mangled carcass of a sea turtle was discovered at Changi Beach on Monday morning (Jan 2). The metre-long turtle was found with its shell sliced open.

“I was jogging in between the beach and the jogging track, and the stench caught my attention,” said Mr Chandran V R, who shared photos of the grisly find. “There was a very big gash on the turtle that was probably caused by a propeller. It was probably dead for at least one or two days.”

Mr Chandran added: “It is very sad to see such a graceful and rare giant turtle lay dead on our shores. We can learn from (the incident).”

“I hope more can be done (in terms of raising awareness) to avoid such tragedies in future, especially for our endangered animals,” he said.

Responding to queries from Channel NewsAsia, the Agri-Food and Veterinary Authority of Singapore (AVA) said it received feedback about the sea turtle at Changi Beach and alerted the National Environment Agency to clear the carcass.

Mr Stephen Beng, chairman of the Singapore Nature Society’s Marine Conservation Group, told the AFP that the creature appeared to be a female green sea turtle, which the environmental group WWF has classified as endangered.

“From the injury scars, it most definitely was a boat strike. The propeller mark was likely from a large one and it seems the turtle was making a dash for cover,” Mr Beng said.

He highlighted that marine animals are at risk from boats because Singapore is one of the world’s busiest ports and its shipping lanes “bisect the longer coastal beaches of our main island from the richer coral reefs of our southern islands”.

Mr Beng urged boat crew to be vigilant to avoid hitting wildlife and said they should ideally maintain a distance of 50 metres and slow down when animals are sighted.