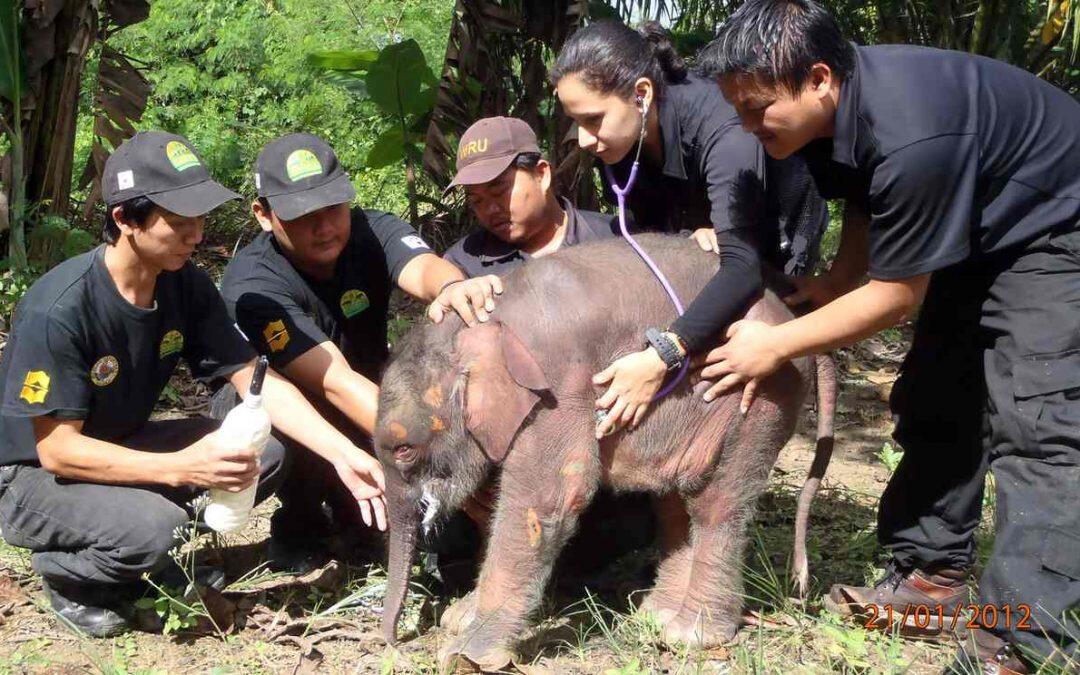 Even the planet’s smallest elephants, tucked away on the island of Borneo, are no longer immune to the global poaching crisis for ivory.

On New Year’s Eve, wildlife officials in Sabah, Malaysian Borneo, found the bones of a beloved male elephant, nicknamed Sabre for his unusual tusks that slanted downwards like the extinct sabre-toothed tiger’s canines.

The discovery of Sabre – he was probably killed in late November – came just days after wildlife officials found a freshly slaughtered male elephant with its face cut off to get at the tusks. Both Sabre and the unnamed male perished within 1.5km of one another, though a month apart.

Prior to these events, elephant poaching had not been considered a major issue in Sabah. Benoit Goossens, director of Danau Girang Field Centre in Sabah, said the grisly finds indicated a professional hunter and trader may be setting up business in Sabah.

First discovered on a palm oil plantation by conservationists in early October, Sabre had been rescued and moved to Kawang Forest Reserve. Conservationists fitted the bizarrely-tusked pachyderm with a satellite collar and released him into the wild, thinking him safe.

“We were obviously wrong,” said Goossens.

“There are no words to express our sadness,” said wildlife vet Pakeeyaraj Nagalingam. A member of Sabah’s WildlifeRescue Unit, Nagalingam aided in Sabre’s rescue and translocation in October.

“It looks like there is no safe place for elephants in Sabah any more. The relevant authorities who are responsible for enforcement of illegal wildlife poaching and other illegal activities must work harder and smarter,” he said.

Sabre’s tuskless skeleton was found just one day after China announced it would ban the ivory trade by the end of 2017.

“The loss of these elephants is especially sad when the world is waking up to the African elephant crisis and closing its domestic ivory markets,” said Elizabeth Bennett, vice president of species conservation at the Wildlife ConservationSociety. “Only when all ivory markets are closed and demand for ivory ceases will all of the populations of elephants across Africa and Asia be safe from such poaching.”

The taxonomic status of the Bornean pygmy elephant, as it’s popularly known because they are about one fifth smaller than other Asian elephants, is in limbo. Genetic data shows it may have evolved independently for 300,000 years. Some have proposed that the animal should be listed as a separate subspecies.

However they wind up classified, the Borneo’s elephants are gravely endangered: only 1,500 to 2,000 survive today in a decreasing habitat fractured by industrial palm oil plantations. Deforestation and habitat loss remain the smallest elephants’ biggest threat.

Although considered pests to the state’s expansive palm oil plantations, the elephants are a tourist draw to the region and ecologically support the forests and floodplain through seed dispersal.

Asian elephants have faced far less poaching than their African cousins over the centuries, since only some male Asian elephants sport tusks – whereas all African elephants have tusks. Asian ivory is also considered less valuable than African ivory, due to its brittleness and propensity to yellow.

“My hope is that Sabah wakes up … we are losing our megafauna, the rhino is gone, the banteng [wild cow] is going, the elephant will be next,” Goossens said. “Those crimes should not go unpunished. Let’s not lose our jewels, the next generation will not forgive us.”

Source: The Guardian
By: Jeremy Hance