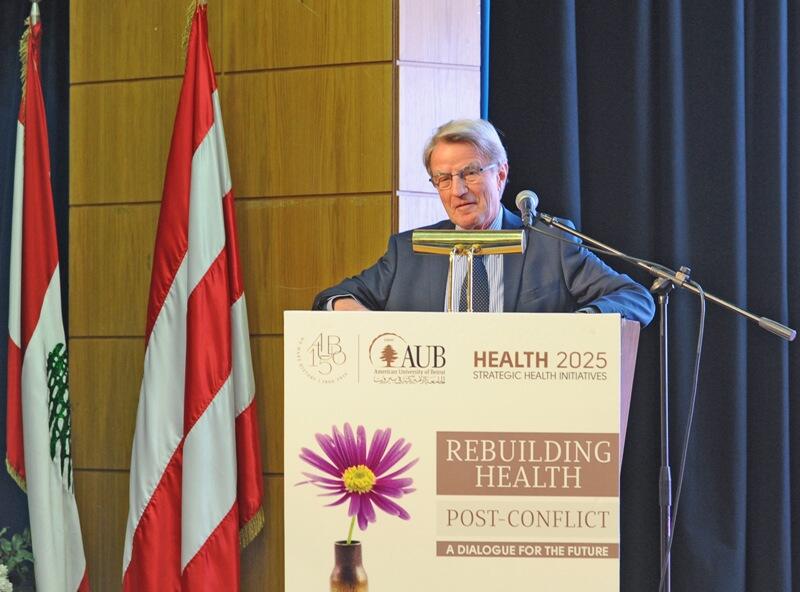 The Office of Strategic Health Initiatives (SHI) at the American University of Beirut (AUB) organized an International Forum on “Rebuilding Health Post-Conflict: A Dialogue for the Future” between December 8 and 10, 2016. This is the first International Forum on rebuilding health post conflicts in the Middle East and North Africa (MENA) Region.

The Forum was launched with an opening Ceremony in the presence of a number of dignitaries.

In his Opening Ceremony speech, AUB President Dr. Fadlo R. Khuri said: “The challenges of rebuilding health after conflict in the 21st century are certainly ones that AUB and its Medical Center are fervent about meeting for the benefit of the long-suffering communities around us.The conflicts in Syria, Iraq, Yemen, Palestine have seen the destruction of health facilities, the savage infliction of death and injury, with civilian populations in the firing line as much, if not more, than any armed contingents, and with attacks on medical personnel a depressingly regular occurrence. We see the rise of preventable diseases and malnutrition, with psychological trauma and other long-term health complications threatening our populations in an unknown future.”

“And of course we see the refugee crisis, which per capita of population has put a greater burden on Lebanon than any country in the world-although I stress it is a burden that the vast majority of this small country are happy to bear, and do so with amazing grace and equanimity”, he added.

“In the next decade we will have one of the finest medical centers in the world, and by far the best medical center in the Arab world. The answer is establishing in this university a Health Sciences Campus, not just a physical space, but a functional and organizational synergy that will preserve our centers of excellence, will link them together and empower them. There’s nothing like this in the Arab world; there really isn’t anything quite like this in the globe, because even the best institutions may nominally have all the pieces, but they are minimally interactive. We are calling Health 2025. Through it, we want to see AUB serve as the regional and global reference institution for health, realized through the impactful research we carry out, our models of engaged instruction, and the excellence of patient-centered medical care and contextualized health service”, Khuri concluded.

Executive Vice President for Medicine and Global Strategy at AUB, Dr. Mohamed Sayegh, stated: “To implement change, we have to build resilient and prepared health systems that provide service delivery in crisis and post crisis contests. AUB’s Vision on Health: Health 2025 is but an attestation to our commitment and continuous endeavor in improving healthcare systems in the region and beyond.”, whereas Associate Vice President for Health Affairs, Dr. Shadi Saleh, announced: “We, in health and beyond, have a moral obligation first and a professional obligation as well to think, plan, convene and potentially execute in a way that would allow these individuals to get the care that they need.”

The Head of Delegation of the European Union in Lebanon, Christina Lassen, said: “The EU is committed to continue its support to the Lebanese health sector to improve access to high quality, equitable and affordable health services for both vulnerable Lebanese in need and Syrian refugees. Earlier this week, the EU approved a new support package to the Lebanese health sector worth €62 million thereby once again proving the EU’s engagement in this sector. Health is one of the key areas for us supporting Lebanon to address the impact of the Syrian crisis.”

Dr. Bernard Kouchner, former French Minister of Foreign Affairs and co-founder of Médecins Sans Frontières (MSF) and Médecins du Monde, gave a keynote speech on “The Social and Political Transition to Post-Conflict”. He said: “Rebuilding health in post-conflict means that the conflict is over and the conflict here is not over,” he said. “Is it possible to set up a project in a time where you are still receiving so many refugees?

“In our particular projects on medicine, we knew that global health was linked to development. Health without development is not possible. Progress in development means education, money, investment-and this world is not receiving enough Post-conflict health should be a preventive medicine and educating the people to receive their right to health is key.”

The forum created a platform for dialogue between key actors in health throughout the course of eight sessions, where renowned national, regional, and international speakers presented their knowledge and expertise to an eager audience who came from Lebanon and countries of the MENA, Europe, and the US. The panelists outlined the impact of conflict on health from its different social, economic, and medical aspects, and critically discussed the rising health needs of people living in conflict zones. The speakers emphasized the need for coordinating efforts in reconstructing health in the transition to the post-conflict era, which also falls within AUB’s vision for health, “Health 2025”.

As part of the Forum events, scholarly projects on health in conflict that aim to generate evidence and recommendations for the post-conflict period were presented during two poster presentation sessions.

The Forum will be concluded with a consultation meeting on “Devising a Donor Framework for Health in the Post-conflict Era”. Participants from thirteen local and international key donor and relief agencies with a track record of impact and work in health in emergencies laid the cornerstone for efficient donor strategies that can respond to the health needs of people post-conflict and succeed in rebuilding the health sector, even before the conflict in the Arab region recedes.

The Office of Strategic Health Initiatives will now prepare a white paper outlining the outcomes generated from the forum, which will also be disseminated to the key health stakeholders in the region.