The world’s deadliest bird is endangered 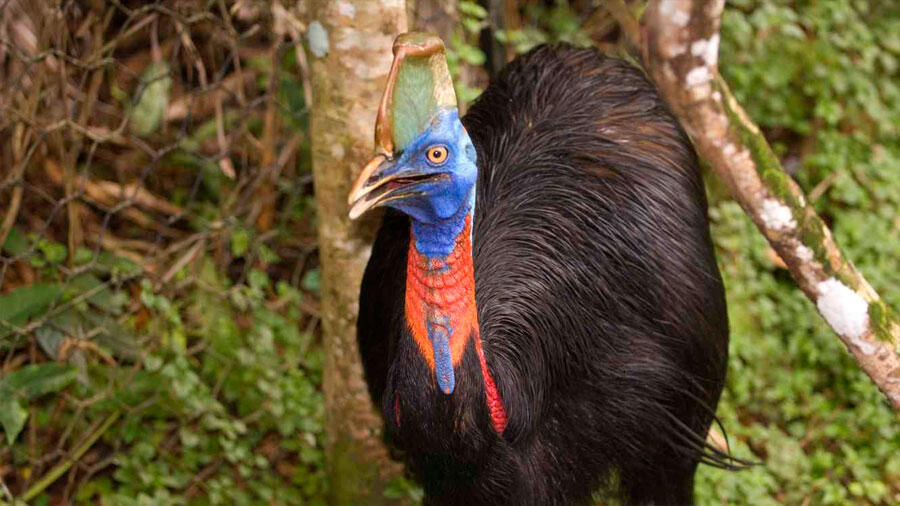 It is the cassowary, a lone bird, strong legs and sharp claws, which knows how to defend well when he believes that its territory has been invaded by strangers.

It was one of these specimens that showed up recently in a marriage ceremony at a beach in northern Queensland in Australia.

While the guests chairs were arranged in two blocks, facing the dais where took place the marriage, a male of 15 years down the hallway steadily, as confident in his imposing personality.

For Antoinette Duncan, the owner of Etty Bay Caravan Park and Kiosk , where the ceremony was held, it is very normal four – two males and two cassowaries all females make an appearance in the area, especially at sunrise and sunset.

But they never knew that attendees beachfront wedding is that cassowaries are able to do much damage to anyone if for some reason often unexpected came to feel harassed.

With a size that can reach two meters high and weighing up to 80 kilos, this bird is only surpassed in size by the ostrich.

Hence, it becomes a very dangerous animal that usually attacks not only with its beak, but also with a vigorous legs, with two inner, long, pointed fingers, able to cut an object as if it were a knife.

According to a publication of Scientific American, although the latest fatality in mainland Australia was recorded in April 1926, when Phillip McClean, 16, received a wound in the throat after running into a cassowary and fall to the ground, there have been many reports of attacks.

The most common injuries were puncture wounds, lacerations and bone fractures. These attacks are more likely when the person is squatting or has been dropped. That is why we are discouraged not bend before them, nor pegárseles behind.

According to a study conducted in 1999 from 221 attacks this duly registered bird, it showed that most of these were due to the interaction between poultry and humans through food.

Seven of these attacks occurred by the presence of people in an area where the cassowary was feeding, while another 32 cases clearly reflected defensiveness of the animal, which was protecting himself, their young, or their eggs.

However, their aggressiveness and strength have not been worth much for this endemic species of Australia that we see in many of our zoos are about to become extinct.

Between June 1996 and February 1997, six cassowaries were killed by dogs in the area of Cairns in Australia’s northwest, while 35 reported attacks against dogs, 29 were in self-defense.

Earlier this year, several local media have referred to the increase, not only attacks, but violent attempts input cassowaries not a few houses in the rural region of Queensland.

Turns out, after a strong typhoon that hit the region, many copies of cassowaries were forced to leave their habitats in the forest in search of food.

Therefore, to provide local intervention, the state issued a stern warning to stay away from these birds. Although the measure also seeks humans come to firearms to defend themselves and decimate, as is already known to occur, the population of these unique and dangerous birds.

The sale, aging in adverse conditions and trafficking of these animals at an early age to become domestic exotic birds, has been decreasing the number of individuals who at other times were reported.

Although they are very fast animals, and skilled swimmers, their main enemy is still us humans.