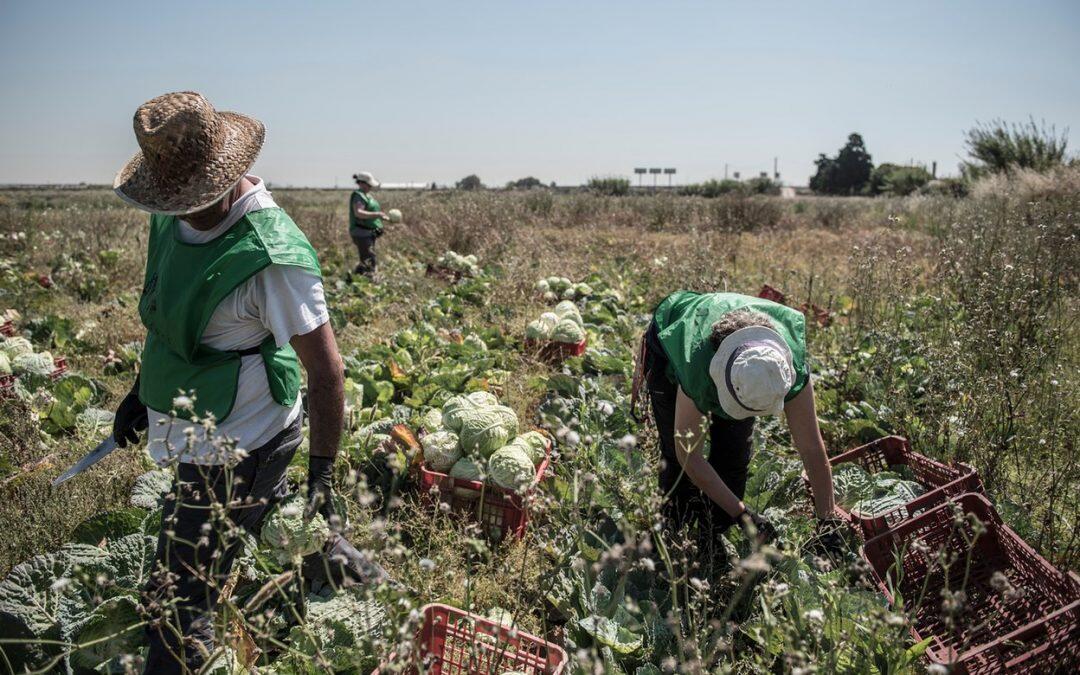 Under a blazing Catalan sun, Abdelouahid wipes the sweat from his brow in a cabbage patch full with clouds of white butterflies. “It’s really not warm today,” he says. “It’s only hot if you stop working.”

Around him, unemployed workers and environmentalists squat in green bibs, black gloves and hats, plucking cabbages that would otherwise be threshed, to distribute at food banks around Barcelona.

A 39-year-old Moroccan emigré with two small children, Abdelouahid began “gleaning” – harvesting farmers’ unwanted crops – with the Espigoladors(gleaners) after losing his job in the construction industry four years ago. It is Ramadan and he is fasting but still smiling as he cuts at the green jewels.

“I don’t like to spend my days at home, sending CVs to employers, waiting for their rejection letters, or going around the restaurants trying to find food,” he says. “I prefer to do something positive. A lot of people need this food. It is better to collect it than to leave it.”

Europe wastes some 88m tonnes of food each year – around 173 kg per person – with costs estimated at €143bn (£113bn). Advocates of the new gleaning movements say that its collection could reduce pressure on land use, improve diets, feed the hungry and provide work for the socially excluded.

For now, most of its recovered foods go to food banks, but the Espigoladors social enterprise has launched an “Es Imperfect” (is imperfect) brand of jams, soups and sauces made from recovered produce.

The line is growing so fast that the day after the cabbage picking, the project’s founder, Mireia Barba, was called to a meeting of Cotec, King Felip VI’s national development foundation.

Another fruit of the gleaning project has been an “I’m imperfect too” advertising campaign which challenges conventional ideas of food and beauty, by using photos of ordinary people holding painted fruit. The idea was to change misconceptions about browned, soft or unusually shaped fruit and veg being any less tasty.

Gleaning has a long tradition in rural Spain associated with dignity of the poor and communal food preparation, but the onset of austerity sparked a revival born of necessity.

Abdelouahid says that in the weeks ahead he will lose his sole income – a monthly €426 social security cheque – after passing a four-year threshold. He is not alone.

The El Punti Solidari food bank in the nearby town of El Prat is preparing to open its doors to 500 local users as we arrive, with a van buckling under the weight of cabbage from the fields of Viladecans.

The centre is co-run by the Red Cross, Caritas – a church agency – and the local council. Its staple is processed foods provided by the supermarket chain Carrefour, but the gleaners’ fresh produce is treated like gold dust.

Arnau Garcia, a council coordinator for the food bank said: “Espigoladors is so important to us because they take their vegetables directly from the field. The people who come here often don’t have very structured lives and do not put a value on vegetables. But we think that it is very important and put a high priority on it.”

Food bank users who glean are allowed to take home a crate of whatever they have picked. The green bib uniforms were introduced after stealing by some food bank users caused problems with the local farmers.

Only one of today’s field volunteers doubles his gleaning activism with distribution, Barri, an ex-glazier in the building trade who got active after suffering an “anxiety crisis” brought on by unemployment.

I didn’t used to think about food waste before doing this,” he said. “I had no conscience about it. But now, when I saw a cafe near here throwing away churros (a traditional sweet), I told them I would not go back to their place. It is shameful to waste food when families really need it.”

With his sideburns, piercings and studded bracelets, Barri looks more like the drummer in a rock band than an ecologist. Many of the Espigoladors come from less deprived backgrounds.

Yolanda Catalan is an environmentally minded 24-year-old art student who was inspired by a Global Feedback campaign called Feeding the 5,000. After watching a French film, The Gleaners and I, she found Espigoladors via Facebook.

“My family are farmers so I know all about food waste,” she said. “When our potatoes were touched by the harvesting machines, we would eat the ugly ones so that we could sell the others. If we did not eat them, they would be thrown away.”

Es Imperfect uses carrots, onion and even peppers in an innovative array of jams that are flying off the shelves in Catalan high streets, with the number of stockists almost tripling from 40 in January to 112 today.

In Terrassa, Albert Falguera the owner of the 4Unces shop said that he bought Es Imperfect jams after customer recommendations. “They sold out in a few hours so I had to make a second order,” he said. “I have several customers who have already tried one of each flavour.”

The artisanal jams are processed by a sympathetic local family business run by Manel Dominguez. Last year, he produced 20,000 organic jam jars, some made with plums or peaches, others with eggplants or carrots.

“Its a really interesting project and we agreed a special price, because the work is so necessary,” he said. “The main problem on my side is the improvisation, because I don’t know when they will bring the fruits and veg.”

Local farmers often invite the espigoladors with a day or two’s notice before fields are replanted, meaning improvisation is often needed on the part of the gleaners too. With demand for Es Imperfect products rising fast, the espigoladors will soon be moving to pastures new.

To read the full article by Arthur Nelsen on the Guardian, click here.