The UK and Australia no longer have dedicated environmental protection ministries 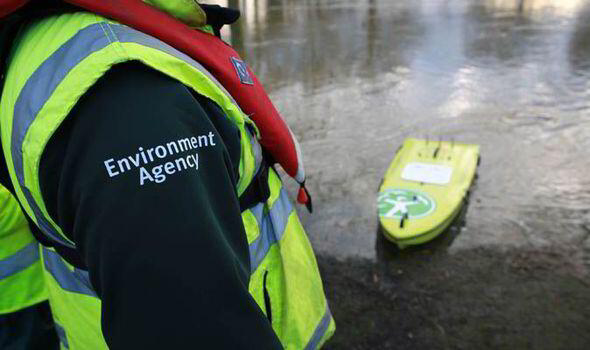 The United Kingdom and Australia no longer have ministries dedicated to protecting the environment and fighting climate change, after both countries folded their environment portfolios in to other departments. That’s leaving many worried that the two Commonwealth countries are stepping back in the fight against climate change.

The cabinet reshuffles in both countries come after a wave of political instability that saw Australia narrowly re-elect Prime Minister Malcolm Turnbull, and the UK usher in Prime Minister Theresa May, after the sudden departure of David Cameron, her predecessor.

Last week, in one of her first acts as prime minister, May abolished the Department for Energy and Climate Change. This department’s former duties have been moved to the newly created Department for Business, Energy & Industrial Strategy.

Critics are concerned that the move means the fight against climate change will become less of a priority than in the past, and that disastrous consequences will follow.

An environmental economist at the New Economics Foundation, Stephen Devlin, said, “this reshuffle risks dropping climate change from the policy agenda altogether – a staggering act of negligence for which we will all pay the price.”

Green Party MP, Caroline Lucas, said, “dealing with climate change requires a dedicated minister at the Cabinet table. To throw it into the basement of another Whitehall department, looks like a serious backwards step.”

May didn’t axe the environment post altogether, although she did downgrade it into a junior job. She appointed a new secretary of state for environment, Andrea Leadsom, that has voted against setting carbon targets, according to the Independent, and against measures designed to tackle climate change.

“When I first came to this job one of my two questions was: ‘Is climate change real?’ and the other was ‘Is hydraulic fracturing safe?’ And on both of those questions I am now completely persuaded,” she told a Parliamentary committee last year.

In Australia, meanwhile, Turnbull opted this week to merge the energy and environment portfolios, and appointed a minister to look over the portfolio that has been accused of being “pro-coal and pro-nuclear” by the former leader of the Green party in the country.

The new appointee, former resources minister Josh Frydenberg, has made several statements, as recently as December, claiming coal mining is not incompatible with the move toward increasing renewable energy sources.

Nikola Casule, a Greenpeace member who called Frydenberg’s position on climate change an “embarrassing relic from a different area” said that, “for Malcolm Turnbull to appoint a minister who still believes that there is still a strong moral case for coal even during the worst coral bleaching in the Great Barrier Reef’s history is clear show of contempt for the Australian public.”

Coral bleaching, a process whereby the coral loses its algae, eventually starves, and is replaced by seaweed, occurs when the water is too hot for an extended period of time. 93 percent of the Great Barrier Reef is now affected by coral bleaching, according to an April report from the National Coral Bleaching Taskforce.

The former leader of the Australian Greens, Bob Brown, said, “in an age when new coal mines are criminal, the syndicates will be glad Mr. Frydenberg has been appointed chief judge on this issue so vital to climate change and the planet’s biosphere.”

The decision to merge the departments has received some support, however, including from John Connor, the chief executive of the Climate Institute, an environmental group.

“What we’ve seen in the past has been a hodgepodge of policies that has actually impacted investment,” Connor told AAP, noting that the merger makes sense because the departments are “critically interrelated.”

Frydenberg’s replacement for resources minister, Matthew Canavan, has also come under heavy criticism for alleged anti-environmental views, including that the coal-mining industry is not an impediment to the government’s efforts to meet the Paris Agreement’s target for reduced carbon emissions.

In December 2015, 195 countries, including the UK and Australia, signed the Paris Agreement, a legally binding agreement to reduce carbon emissions. The consequences of failing to meet the targeted level of emissions will have global repercussions, which experts say will include a dangerous rise in the sea level.

In a speech given at the summit, then prime minister of the UK, David Cameron, said, “Instead of making excuses tomorrow to our children and grandchildren, we should be taking action against climate change today.”