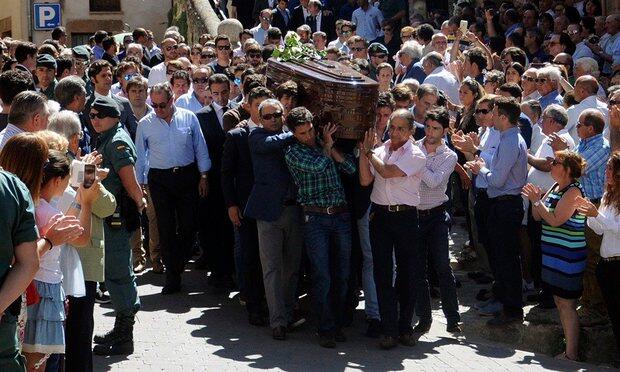 Animal rights activists in Spain have renewed calls for a total ban on bullfighting after the death of a young matador in front of a crowd on Saturday.

Víctor Barrio became the first professional torero to die in the ring in Spain since 1985 when the bull, Lorenzo, gored him in the thigh and chest during a fight in the eastern town of Teruel.

The animal’s horn pierced the 29-year-old’s lung and aorta. The matador was pronounced dead late on Saturday. Hundreds of people gathered for the funeral in his hometown of Sepúlveda, in Segovia, on Monday.

His death – and the news that the bull’s mother will be killed to sever the animal’s bloodline – prompted the animal rights party, Pacma, to demand an end to the sport in Spain.

“We reject traditions based in violence, revenge and blood,” it said in a statement. “Bullfighters say the mother of Lorenzo, now known as a ‘killer bull’ after ending the life of Víctor Barrio, will be sent to the slaughterhouse to ‘end the lineage’.”

Pacma said no rite, tradition or custom rooted in a series of deaths and nourished by blood and hatred could be seen as healthy in any society, adding: “We know of only one ethical means to do away with all this: the total abolition of bullfights.”

Barrio’s death was marked with a minute’s silence at Madrid’s Las Ventas bullring on Sunday. While Spain’s acting prime minister, Mariano Rajoy, tweeted his condolences to the family, many took to social media to celebrate Barrio’s fate and to attack bullfighting.

Law enforcement agency the Guardia Civil used its Twitter account to warn that although such commentary was not a offence, it was ugly behaviour: “Wishing for, or celebrating someone’s death, isn’t a crime. But it shows nastiness.”

Vicente Zabala de la Serna, bullfighting critic for El Mundo newspaper, said he could not understand the outpouring of hatred that had greeted the death of a bullfighter of “admirable vocation and belief”.

He said both Barrio’s family and Spain’s bullfighters, “who risk their lives on a daily basis”, were in tremendous pain, a pain that had only been compounded by the spite exhibited online.

“The way anti-bullfighting activists have behaved on social media has been awful, shameful and absolutely inhuman,” he said.

“They talk about respecting the pain of animals but they haven’t respected the death of a human being or the pain of an entire family that’s had to read absolutely wretched messages on social media.”

Barrio is the first professional matador to die in Spain since José Cubero, known as El Yiyo, was gored in Madrid in 1985.

Seven years later, two banderilleros, whose job it is to stick darts into the bull, were fatally gored in Seville.

Despite bullfighting’s emblematic status in Spanish culture, many have called for an end to the tradition. The regional government of Catalonia banned bullfighting in 2010, while Pacma attracted almost 285,000 votes in last month’s general elections.

Over the weekend a 28-year-old Spaniard died during a bull run in the village of Pedreguer, near Valencia. According to the regional government, the man died after a bull’s horn pierced his lung and heart while he tried to help another runner.

There were further injuries on Saturday at the San Fermín festival, in which bulls and runners rush through the cobbled streets of Pamplona.

A 33-year-old Japanese man was gored in the chest, a 24-year-old Spanish man in the arm, and 12 others sustained minor injuries, according to the local government’s website.