A long way from Benidorm: rural regeneration in south-east Spain 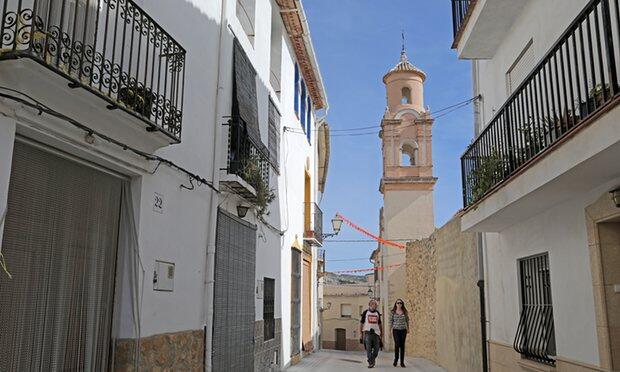 Evaristo is teaching me to make paella. You might, like I did, think you know already, but Evaristo lives and breathes the stuff – he has made it every day for over 30 years. We’re doing it in his barn, which adds challenges.

“Can you wash the tomatoes?” he asks and I wander off looking for a tap. There are sacks of walnuts, buckets of olives soaking in brine, a newly laid egg lying discreetly in a nest of hay under a workbench, but no tap.

I’m in deepest rural Spain, in the Vall de Gallinera, Alicante, the kind of Spain where you expect to bump into Laurie Lee’s ghost on every footpath. There are the ruins of an old convent on the next hill, and a ruined Arab fort beyond that. It’s a tranquil land weathered by mystery and tragedy, but only a day’s walk from Benidorm, with its 200 nightclubs and 1,000 bars. It does not seem possible. 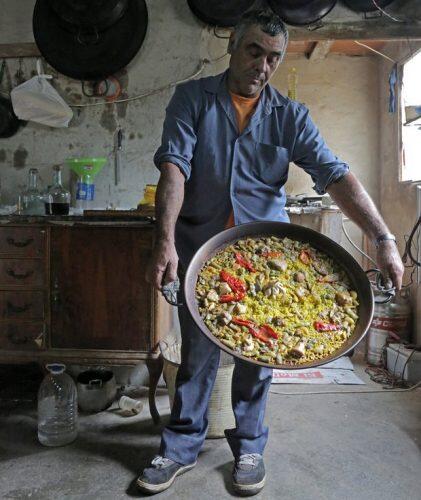 Evaristo is not part of that Benidorm world. He slops a great puddle of olive oil into a pan the size of a Visigothic war shield. Around this he builds a defensive wall of salt, then slices red crescents of peppers into the gently simmering oil. “Now,” he says, “let’s go and check on the horses.”

His family, he tells me, came from the Balearics to the Valencian Country to help repopulate the valley after the Moors were ejected in the early 17th century. His mother tongue, I’m told firmly, is Valencian, not Castilian or Catalan. He is steeped in rural traditions that are slowly, inexorably, withering as the valley loses its population. But I’m here to witness an attempt to halt that. Evaristo is one of many locals who are taking time to introduce visitors to their forgotten, bucolic idyll. It’s an innovative rural regeneration scheme that gives the outsider a privileged introduction to a host of local characters and experiences.

I’d started my visit in the village of Alpatro, a tight-knit clutch of stone houses teetering on the brink of a deep ravine whose sides are thick with prickly pears, wild thyme and oregano. Down a narrow back lane I checked in to a homestay, a house stuffed with relics of an agricultural past that began its slide into obscurity with post-civil war depopulation.

Next morning, my first experience was to walk a few miles up the valley and meet olive grower Toni Civico, who showed me around the idyllic hamlet of Benissili: population 25.

Toni took me to meet his oldest olive tree, a gnarled veteran laden with fruit. “If that tree could talk,” he says, “he’d speak Arabic.” The Moors stayed here for six centuries and crops they introduced – almonds, mulberries and walnuts – still dot the crumbling stone terraces that contour the lower slopes like the fading fingerprints of previous generations.

Higher up, the land is covered in pungent herbs that are cropped by sheep: lamb from here was famous until supermarkets elbowed aside its lean, hard primalameat, from year-old lambs, in favour of softer, blander fare. Now the main customers, ironically, are Muslim residents of Benidorm, who like to buy a whole, live animal. The only full-time shepherds are Antonio and Pavel. On another day I meet them too, walking with their flocks along green lanes that lead to the high mountain pastures.

Evaristo, my paella chef, also keeps a small flock in the old style. Back in his barn I watch him add pieces of lamb to the puddle of oil, plus white beans and sprigs of rosemary. With everything bubbling away nicely, we can kick back and drinkcazalla, an anise-flavoured spirit, with the toast “Para que nuestras mujeres no se queden viudas! (Let our women not be widows!)”.

We do, at least, have glasses. One of my other local experiences was to meet guide Joaquín for breakfast in Alpatro’s only remaining cafe. When he ordered red wine it came in a porrón, a glass jug with a tapering spout. The idea is to hold it high and pour the wine into your mouth, not down your shirt.

Drinking, it has to be said, is one tradition that shows no sign of disappearing, kept alive by a dedicated group of enthusiasts called men. For them a 10am breakfast porrón of red wine is preceded by a cazalla and followed with a cremaet, flambéed brandy with a dash of coffee. Solid food can be taken, but who’d want to spoil their lunchtime paella appetite?

Evaristo is back at the pot, adding rice, water, garlic and saffron. We have another toast, “Força al canut!” The polite translation is “health and wealth”, but a canut is a bull’s scrotum, so I can sense where that one is going.

“Did I see you yesterday out walking?” asks Evaristo. There are no secrets in these parts. I had walked to a ruined village with local herbalist and healer Alicia, who introduced me to a vast array of wild plants.

“There’s one for every ailment,” she said, picking armfuls of thyme, mullein and oregano. I was taught how to cook minxos, a kind of pasty stuffed with wild leaves, and afterwards scrambled up to the old fort for some superb views. The valley walks were wonderful and I wished I had more time to explore further afield. Above Alpatro I found ancient trails winding up through tiny meadows of flowers, the stones worn deep by centuries of travellers’ feet.

When I mention the flowers, Evaristo tells me the area once produced excellent saffron. He is poking at the paella. Another minute and he deems it ready. We eat direct from the pan, as the Moors might have done, and Evaristo shows me how to scrape for that delicious crusty bottom layer of rice, the socarrat.

“Slow food,” he grins afterwards, reaching for the coffee and rum. Like all good things, like slow travel too, it takes a bit more time and trouble to do properly, but the results are worth it.

• The trip was provided by Village Ways (01223 750049, villageways.com), whose seven-night Spanish Rural Life trip to the Vall de Gallinera costs from £658pp based on two sharing, including self-catering accommodation and four guided tours (in a party of 3-4 the price is reduced to £471pp, or for 5-6 the price is £446pp). Flights (to Valencia or Alicante) and transfers extra