Amid the repeated violations against the Lebanese Ministry of Agriculture’s decision no. 1/125, which states on banning the hunting of whales, seals, and sea turtles, and after “greenarea.me” website followed up on several sea turtle rescue operations with “Greenarea International” organization, we were informed yesterday about a sea turtle with a head injury at “Havana” beach in Rmeileh region.
According to witnesses, the sea turtle was severely beaten by one of the beach-goers who removed it from the sea and threw it on the shore, just for the sake of entertainment and to take pictures of it. 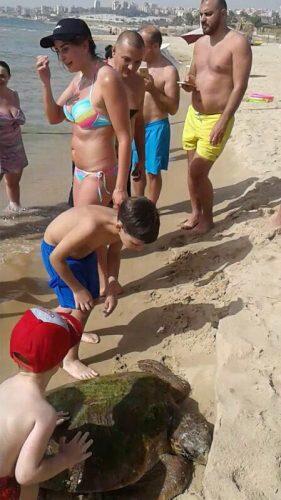 One of the captured images shows a kid forced to stomp on the turtle, although he was crying. Other pictures revealed beach goers snapping pictures with the turtle.

“GreenArea International” contacted the Lebanese civil defense’s maritime center in Jiyeh, knowing that they (civil defense) were cooperative and they transferred the turtle immediately to their center in Al-Mina region, and provided it with the necessary aid, as much as their budget enables them to.

The organization also contacted the ministries of environment, agriculture and the animal welfare organization “Animals Lebanon”, to undertake the necessary veterinary measures to rescue the turtle, which is still in a critical condition. The preliminary medical examinations revealed that the turtle needs an X-ray, to see the extent of damage its body was facing due to the brutal beating it has taken.

This is not the first time that the organization intervenes to save sea turtles. A month ago, several sea turtles were found dead on the sea shore extending from Sidon to Jiyeh. “Greenarea International” spotted a third dead turtle a few days ago on Adloun Beach.

Turtles which have a huge head and back skin (the largest species of sea turtles) mostly rely on jellyfish in their diet (The adult sea turtle’s consumption is equivalent to 200 kg per day). 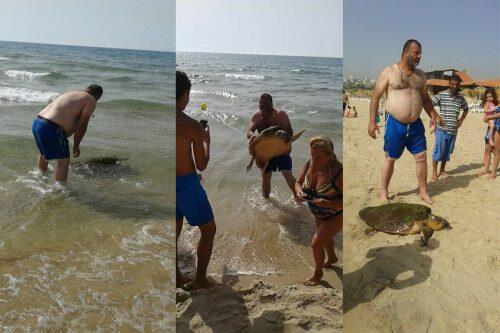 Sea turtles are one of the organisms that the marine life is characterized by in Lebanon, and they reside on the Lebanese sandy beaches.

Two types of sea turtles were recorded in Lebanon: The Carettacaretta and the Cheloniamydas, and both are endangered species, according to the International Union for conservation of nature’s (IUCN) red list.

On March 20 2015, the Cabinet approved on declaring a national day of sea turtles in Lebanon on the 5th of May of each year, based on a proposal made by the “Janoubiyyoun Khodor,” aiming to make this date a national educational and media awareness day, in parallel with the start of the turtle nesting season, which contributes in raising awareness on the importance of protecting sea turtles, and becomes an occasion for Lebanon to celebrate marine life, and contributes in triggering Lebanon’s implementation of the requirements of international conventions on biological diversity that it has ratified, including the Barcelona Convention. 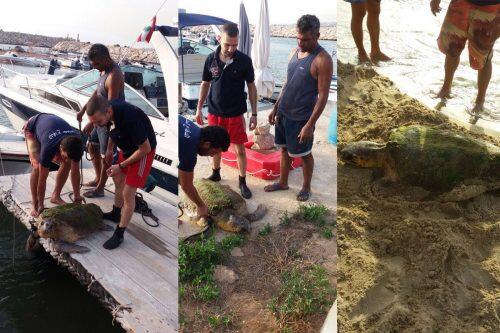 These species visit the Lebanese shores in the nesting season, ranging from May to October of each year. The sea turtles cross millions of nautical miles to lay their eggs where they were born; a tradition that is part of the marine bio-fortification cycle in the Mediterranean.

It is worth mentioning that the Ministry of Agriculture issued Decision No. 125/1 on 23/09/99; the decision states on banning whales, seals, and sea turtles hunting.
Lebanon also signed the Barcelona Convention and its Protocol on the Protection of the Mediterranean Sea from pollution. The Ministry of Environment is considered the official body responsible for the implementation of the terms of this Agreement through the development of legislation and action plans for the protection of nature reserves and sea turtles.

Tomorrow, just as the 16th of June of each year, is the International Day for the protection of sea turtles, and it is an annual event to honor these marine organisms, which have been living for more than 110 million years. The day also contributes in highlighting the sea turtle’s importance in marine ecosystems.