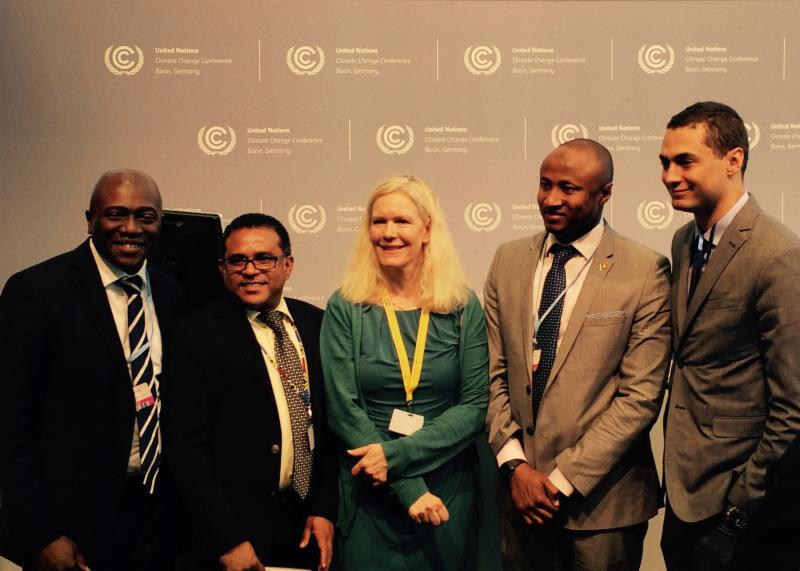 On the final day of the climate talks in Bonn, Germany, leaders of key negotiating blocs joined in call for global action on renewable energy and energy efficiency at COP22 in Marrakech later this year.
The Chairs of these groups, representing over 90 countries, highlighted the launch at COP 21 in Paris last year of the Africa Renewable Energy Initiative, a program with pledges of $10 billion in financial support, as a starting point for scaling up renewable energy worldwide.
The leaders emphasized that COP22 in Marrakech offers an unprecedented opportunity to broaden this success to other developing countries, including small island, least developed, Asian and Latin American countries, as part of an enhanced global effort to support the uptake of renewable energy globally while strengthening energy efficiency.
Among the leaders calling for action were:
Mr. Mpanu-Mpanu, Chair of the LDCs, said that “The Marrakech COP will be an action and implementation COP. With the LDC renewable energy and energy efficiency initiative we are following up on Paris and beginning to deliver concrete solutions vital to addressing climate change.”
“The Least Developed Countries are committed to play our part in the global energy transformation, to provide clean and renewable energy, jobs and opportunities to vastly improve livelihoods for our people”, he said.
“COP22 provides an unprecedented opportunity to strengthen support on renewables to the LDCs, as part of a global programme of support. The energy of Paris must be channelled into real solutions to both climate change and development at COP22 in Marrakech”, said Mr. Mpanu Mpanu.
Ambassador Seyni Nafo, Chair of the African Group, said ”
Africa has taken a lead on renewable energy. With a mandate from 54 African Heads of State we have launched the Africa Renewable Energy Initiative, with the transformational goal of ensuring universal energy access to all Africans and adding double current electricity generation through renewables by 2030.”
“The AREI is a transformative, Africa-led and owned initiative strengthening sustainable development in Africa on a large scale, unlocking the continent’s huge potential to generate renewable energy and bringing electricity to hundreds of millions of people”, he said.
“I am pleased to see the African proposal for a global renewable energy partnership, which we launched in 2014, taking flight here in Bonn.  COP22 in Marrakech can deliver new voluntary cooperation that enables the UN process to accelerate action and deliver results for people, communities and productive sectors in our countries”, said Ambassador Nafo.
Mr. Amjad Abdulla, Chief Negotiator for AOSIS, said “AOSIS is proud to see that the UNFCCC process, including the talks on pre-2020 ambition that we have championed, yielding concrete results. COP22 presents a substantial opportunity to launch practical, concrete solutions towards achieving the 1.5 degree C goal we need to keep all people, including the most vulnerable and our islands, safe.”
Anna Lindstedt, Climate Ambassador for Sweden, said “Sweden is proud to have supported the Africa Renewable Energy Initiative from the beginning and is very encouraged to see similar initiatives from other regions and groupings These ambitious renewable energy initiatives from developing countries show genuine leadership and is exactly what is needed to now shift the focus to implementation of the Agreement and spurring higher ambition of national contributions. COP22 in Marrakesh will be an important step for providing the tool countries need to move ahead.”