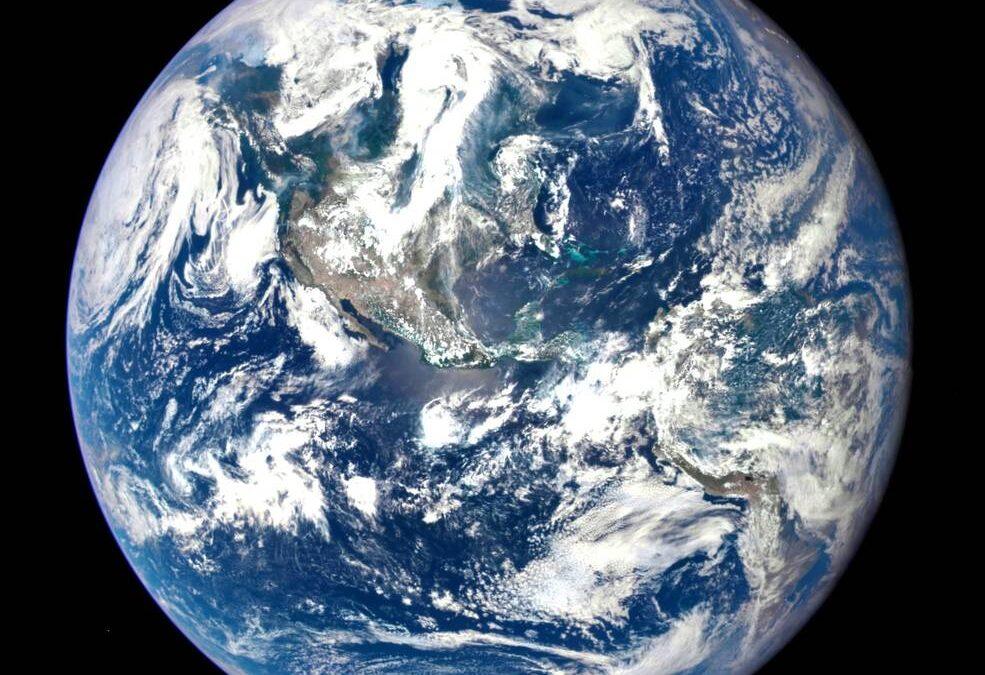 NASA scientific camera aboard the Deep Space Climate Observatory (DSCOVR) satellite returned this view of Earth on July 6, 2015, from a distance of one million miles. The DSCOVR satellite is a partnership between NASA, the National Oceanic and Atmospheric Administration (NOAA) and the U.S. Air Force to maintain the nation’s real-time solar wind monitoring capabilities, which are critical to the accuracy and lead time of space weather alerts and forecasts from NOAA. Credits: NASA

In December 1968, the crew of Apollo 8 became the first humans to leave Earth orbit and head for the moon. They also became the first to look back at their home planet and see the entire world in one glimpse. The view they shared had an everlasting impact.

Photographs of the Earth taken on the Apollo lunar voyages provided a view known as the “blue marble.” One of the best-known NASA pictures is the image of the Earth rising above the desolate surface of the moon.

“It’s the picture that was credited with starting the environmental movement,” wrote author Jeffrey Kluger, referencing the Earthrise photo in a 2013 article for Time magazine.

The impact of seeing the world from the vantage point of a lunar mission was best summed up by Apollo 8 astronaut Bill Anders.

“We came all this way to explore the moon, and the most important thing is that we discovered the Earth,” he said.

One result of the increased environmental awareness provide by the pictures of Earth taken on the nine Apollo missions to the moon was the establishment of Earth Day.

Earth Day was founded as an annual event less than two years after Apollo 8. First celebrated on April 22, 1970, activities now take place around the world, including NASA’s Kennedy Space Center in Florida. The focus is to demonstrate support for protecting the environment.

“Observing our home is at the core of NASA’s mission, and it continues to be a dynamic and growing area of our activity,” said NASA Administrator Charlie Bolden in an Earth Day message to agency employees and contractors in 2015. “We want to know how our planet works, how we affect it, and how it might change in the future.”

According to Earth Day Network, the organization that coordinates the global event is designed to inspire, challenge and motivate people to action.

“In 1970, the year of our first Earth Day, the movement gave voice to an emerging consciousness, channeling human energy toward environmental issues,” said the Earth Day Network website.

Since its inception in 1958, much of NASA’s work has focused on studying Earth and better understanding weather, climate and the forces that make a difference in people’s lives around the world.

NASA’s work in Earth science is making a difference in people’s lives around the world every day. From farms to our national parks, from today’s response to natural disasters to tomorrow’s air quality, from the Arctic to the Amazon, NASA is working for you 24/7.

But the view with human eyes remains priceless.

On Dec. 21, 1968, Anders along with Apollo 8 crewmates Frank Borman and Jim Lovell fired the upper stage of their Saturn V rocket, leaving Earth orbit on a trajectory to the moon. As they turned their Apollo command-service module around, the view was striking.

“We see the Earth now, almost as a disk,” said Borman.

“We have a beautiful view of Florida now,” he said. “We can see the Cape (Canaveral), just the point. And at the same time, we can see Africa. West Africa is beautiful. I can also see Gibraltar at the same time I’m looking at Florida.”

“Get a picture of it,” said fellow astronaut and spacecraft communicator Mike Collins in Mission Control.

The pictures were as historic as they were stunning.

Three days after launch, Apollo 8 was completing 10 orbits of the moon. During a Christmas Eve television broadcast, Lovell noted the contrast between the stark, cratered lunar surface and the view of the 240,000-mile distant world.

“The vast loneliness up here of the moon is awe-inspiring,” he said, “It makes you realize just what you have back there on Earth. The Earth from here is a grand oasis in the big vastness of space.”

Now that the International Space Station has been permanently staffed since November 2000, Earth photography has been an important objective.

“The view from the station is absolutely breathtaking,” said Expeditions 29 and 30 astronaut Dan Burbank when he returned to Kennedy and spoke to employees on June 7, 2013. “We have some impressive cameras on the space station. The vantage point of seeing this incredible planet from 240 miles above is just unbelievable.”

While showing daytime photographs of Earth, Burbank noted that there are striking differences between daylight and night images of the planet.

“It’s hard to get a sense that this planet is populated by humans, except at night,” he said. “That’s when all the cities come to life with lights that show up at night.”

ISS Expedition 26 and 27 astronaut Cady Coleman spoke to Kennedy employees on Sept. 20, 2012. She explained that the view out the window gives a different perspective on life below.

“When you see our whole planet like this,” she said, “you realize we are altogether citizens of the world.”

Astronaut Ron Garan expressed similar beliefs when he spoke at Kennedy on Aug. 8, 2012, following ISS Expeditions 27 and 28. He noted the need to care for Earth.

“When you see the beauty of our planet, it is striking, it’s sobering,” Garan said. “For the 50 years that we’ve been flying humans in space, astronauts and cosmonauts have always commented about how beautiful, how fragile and how peaceful our planet looks from space. Seeing this from space really had a big impact on me.”