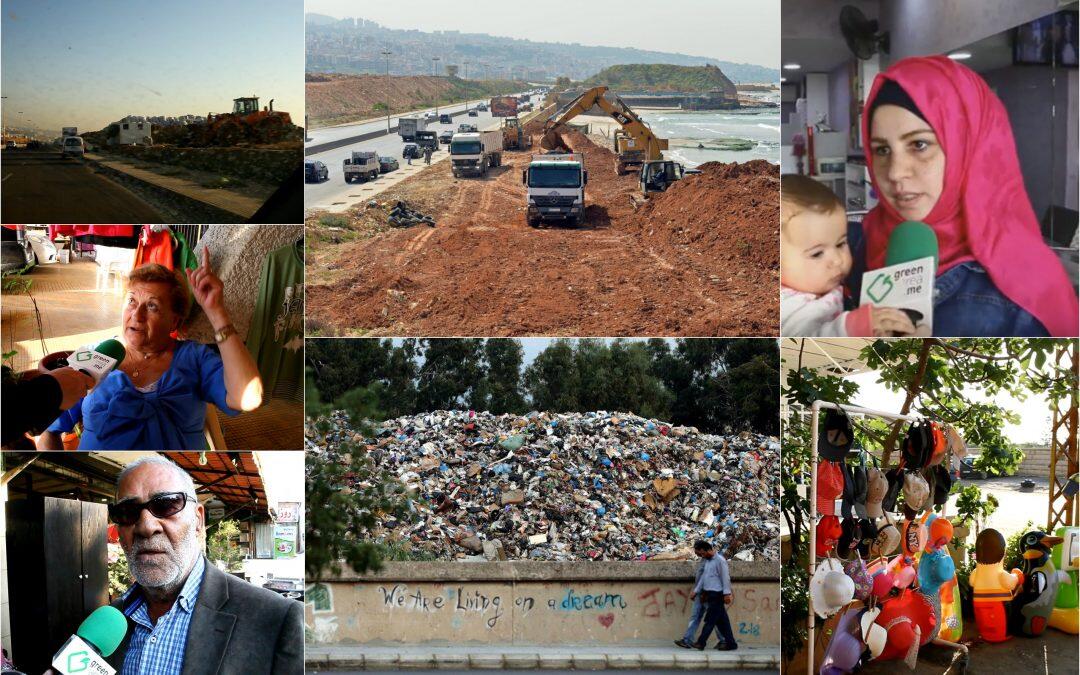 If you pass through Beirut at any time, you might experience a severe headache and feel as if you were going to vomit, due to bad odors in the air from transporting waste to the newly proposed Sanitary landfills.
The ongoing garbage crisis in Lebanon is worsening. Imagine drinking your coffee while smelling garbage at the same time, or concentrating on your work, then being distracted by a bad smell.
We traced the source of the foul odors… the smell was getting worse as we got nearer to the residential areas near the CostaBrava landfill. Khaldeh and Ouzai were our destination. How is this stinking smell affecting residents of areas around the landfill? 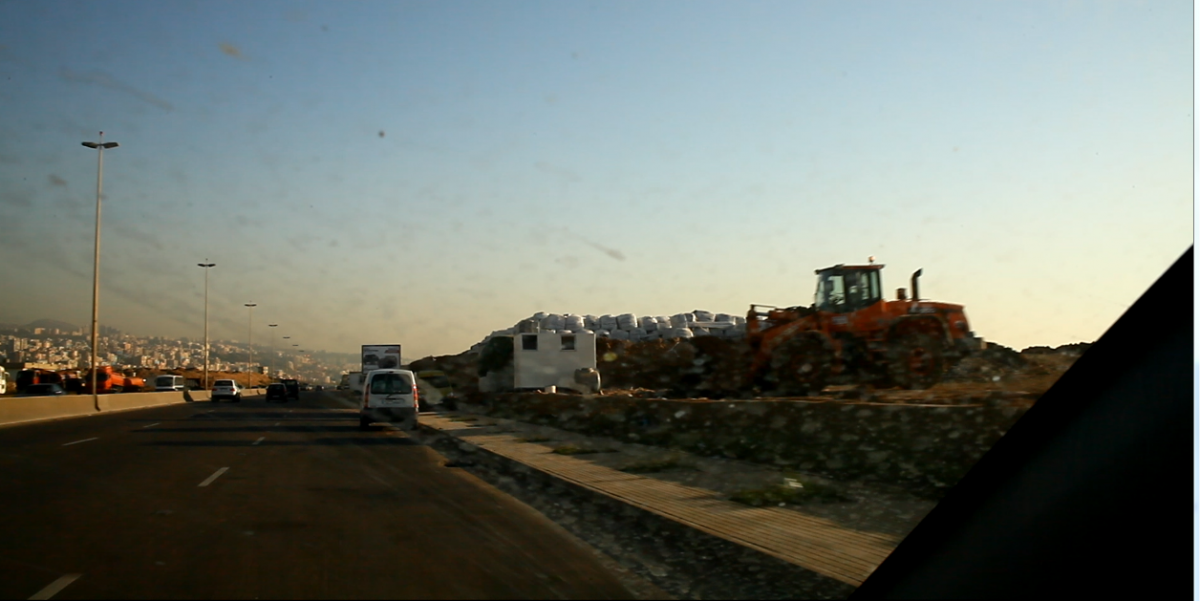 temporary Parking in the proposed site of Costabrava Sanitary Landfill. Bad odors followed us all the way

Costabrava landfill, which was approved by the Lebanese government last month, along with two other landfills, is literally “suffocating” the Lebanese. In Khaldeh, an area near the landfill, people complain of diseases, mosquitoes, and severe rashes.

The same goes for Ouzai Area. People spend plenty of their time visiting doctors and buying medicines from nearby pharmacies. Diseases triggered by garbage leachate, garbage smells, dominate the daily lives of people who just want to “breath clean air”, as they tell greenarea.me.

While Sukleen posted on its “Facebook” page today the following: “The company would like to clarify that, since the seventh of April 2016 and until further notice, its operations to remove the wastes and to transport it to Naameh health landfill began to accompany with pesticide odor and insects twice a day spray and in some of the capital Beirut areas and the highway leading to Naameh and the area of Chahar villages surrounding the landfill”. 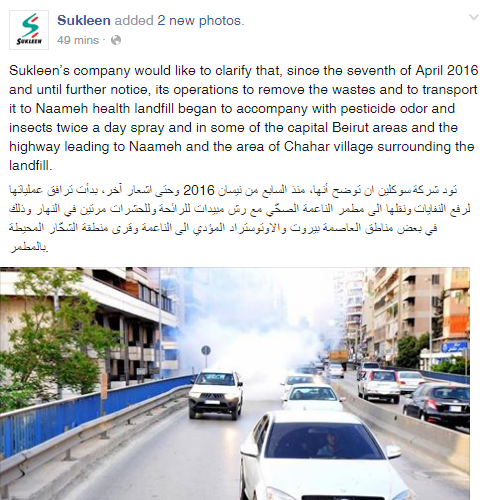 The Cabinet’s plan, which come up after 8 hours of discussions, was to set up temporary landfills in Burj Hammoud, east of Beirut, and in the coastal area of Costa Brava, south of Beirut. The Cabinet also agreed to re-open the infamous Naameh landfill for two months.

Naameh landfill however, was the reason that the protests against the trash crisis started in Lebanon.

While the Cabinet makes it seem as if its plan is a “solution” for the waste crisis in Lebanon, the reality is revealed by people’s voices living near the “so-called solution”- The Costabrava landfill.

Here is what the Cabinet’s “solution” looks like in reality “One capsule every 6 hours should be taken from this medication”, the pharmacist said to a person asking for a medication for allergy. 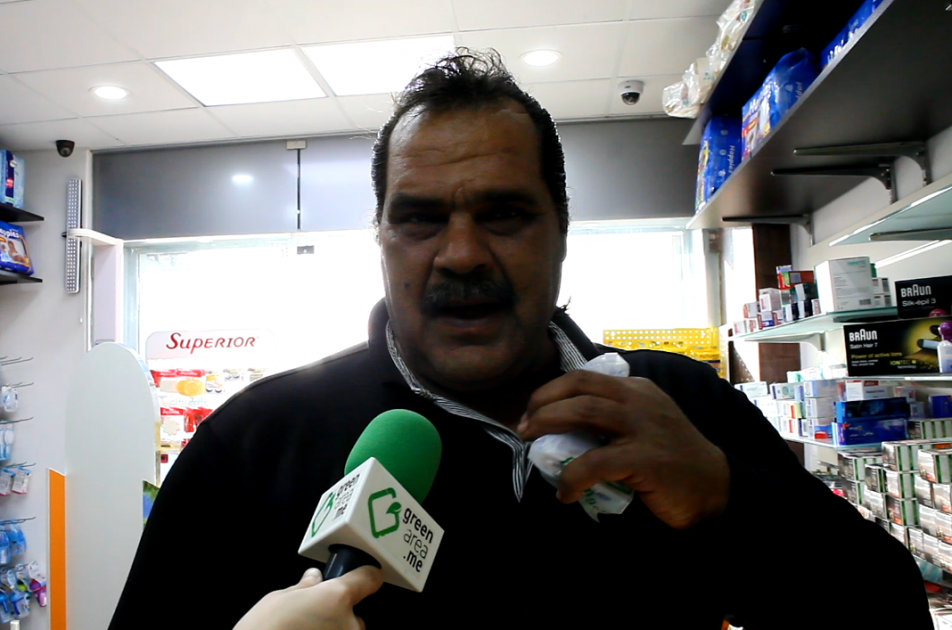 A man buying a medicine from the pharmacy told us that it was for allergies caused by the landfill near his home. “I live in Naameh, we are suffocating”, he said.  “Unfortunately, we cannot open the door due to bad odors. It is impossible to breathe in this area”, he added. The man continued talking about this sad reality: “After washing our clothes in a laundry detergent, they smell of garbage !!” 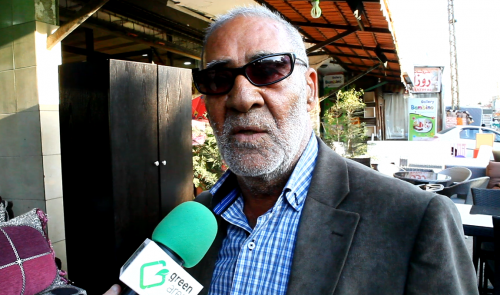 “I went to many hospitals, but none of them solved by problem”, said a man living in Ouzai. “I have paid over 3,000 dollars until now”. He added. This kid living in Ouzai has rashes all over his body due to flea caused by garbage. “My child caught a virus similar to chickenpox”, a woman in Khaldeh told us. She added: “He had a high fever, and rashes spread all over his body”. The government of Lebanon has not yet found an environmental solution for the waste crisis, taking into consideration people’s health as well… So what will the upcoming days hold for us?

The garbage crisis, and the establishment of the Costabrava landfill did not just affect people’s health, but unfortunately, they also affected all the surrounding region economically. 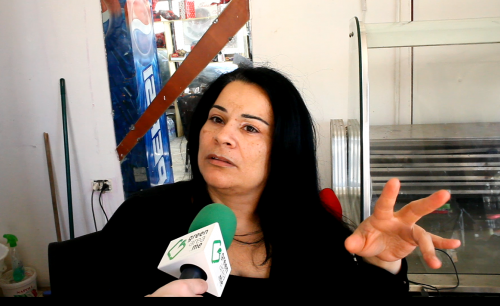 Mrs. Al-Jirdy, an owner of a store facing the beach near Khaldeh, is suffering from the Costabrava landfill’s effects on all levels. She confirms that the municipality is not spraying any pesticide odors to kill mosquitoes. “We paid 700$ for a municipality a year prior to the opening of our store, then we were surprised by the establishment of this landfill. The summer season is already destroyed”, she says.

How did she react against this disgusting reality? She tells “greenarea.me”: I heard that some relatives of mine are candidates for Municipal Elections, but I won’t even bother to see who they are”, adding “even if those following political leaders ask me to elect, I won’t do it”. Bitter words come out of a citizen who was surprised how the politicians in Choeifat and Khaldeh brought the landfill and were the reason for the resident’s diseases and financial losses. A clothes store owner who has been living in Khaldeh for 37 years also complained from the “bad odors we have never witnessed in Khaldeh before”. She tells us “We just want them to remove the garbage, and to remove the landfill, is it too much to ask for?” 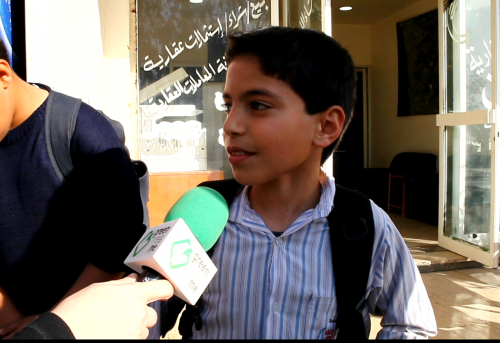 The smell is disgusting, and mosquitoes are all around”, a student living in that region told us. He told us that he finds it difficult to study due to bad odors in the area. Beach accessories outside a store in Khaldeh. (The Costabrava landfill is affecting the region economically).