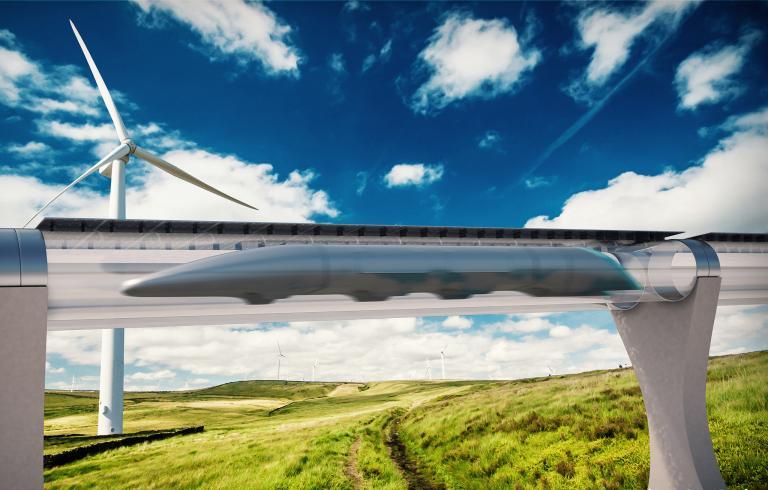 The future of ultrafast tubular travel may be partly shaped in this room on the third floor of MIT’s Edgerton Center, where a team of graduate students huddle in front of computers.

hey’ve done calculations and simulations to design a levitating pod that could transport people at hundreds of miles an hour. Chris Merian, chief engineer, holds in his hand a model of their concept, which won first place in the initial round of a groundbreaking global contest.

Now the MIT students have to build it. They plan to start early next month. This summer, they’ll test their magnet-embedded, bobsled-like prototype at the grand finale of the Hyperloop Pod Competition, hosted by Elon Musk’s SpaceX—a rocket company that encourages teams to “break a pod.”

Good news: no humans will be used in the testing.

What first seemed like a pie-in-the-sky idea by Musk—a visionary who believes colonizing Mars is “doable” and has co-founded PayPal, Tesla and SpaceX—has gained ground in the two and a half years since he proposed this “fifth mode of transportation.” His impetus: travel from Los Angeles to San Francisco in half an hour.

“I’m starting to think this is really going to happen…It’s clear the public and the world wants something new,” said Musk at the competition’s January 29-30 design weekend at Texas A&M University. He told the students: “The work that you guys are doing is going to blow people’s minds.”

“We’re literally building it,” says Rob Lloyd, CEO of Hyperloop Technologies, Inc., one of at least two companies moving to commercialize its own version of tubular travel. By year’s end, he plans a full-scale demo at his firm’s nearly two-mile (3 kilometer) test track near Las Vegas—calling it “our Kittyhawk moment.”

“It’s a viable system,” says John Mayo, project manager of the MIT Hyperloop Team, noting he was initially skeptical. He expects some kind of hyperloop—whether freight or passenger—will occur somewhere someday. He says engineers can figure out how to make it work. The real challenge, he says, will be whether it can be built cheaply enough and get government approval. 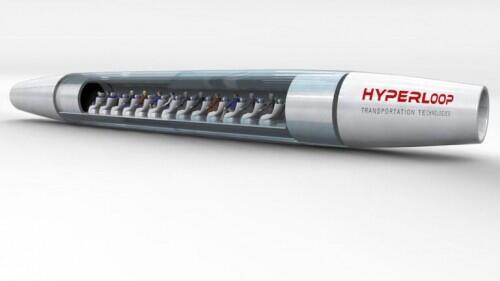 Why Hyperloop At All?

“I was stuck in LA traffic. I was about an hour late for a talk, and I was thinking, man, there’s got to be a better way to get around,” Musk said in a surprise appearance at the Hyperloop design weekend. The students, tweeting from the event with a #whereisElon hashtag, greeted the 44-year-old like a rock star.

Musk, a boyish-looking billionaire clad in a black leather bomber jacket, told them that he mentioned the idea casually at the talk and then felt compelled to offer details. So in August 2013, his 58-page white paper was published on SpaceX’s website. He said he didn’t expect the idea to go viral.

It did. What he proposed was audacious: a solar-powered system that floats passenger pods on a cushion of air through elevated tubes at the speed of sound, or about 760 miles per hour. He described Hyperloop as a “cross between a Concorde, a railgun and air hockey table” and said it could be the travel’s “fifth mode”—after planes, trains, ships, and cars. (Here’s more on Musk’s idea.)

Musk said California’s proposed high-speed rail, designed to go up to 220 miles per hour and reach San Francisco from Los Angeles in two and a half hours, was too slow. His alternative could make the 400-mile (640-kilometer) trip in about half an hour. He estimated it would cost between $6 billion and $10 billion—a fraction of the $60 billion-plus for high-speed rail.

“You could live in one city and work in another city…It gives people more freedom,” Musk told students.

Others agreed, and within a year or so, at least two companies emerged to make Musk’s vision a reality.

“We’re clearly the farthest ahead,” Lloyd says of the race to commercialize tubular travel. At the Apex Industrial Park in Nevada, his company has begun building its open-air propulsion motor and this spring, will start construction of its track and testing of its system.

“When people visit us here, they say: ‘Oh my gosh, it’s happening,’” Lloyd says. By year’s end, after doing a full-scale demo, his company plans to select the top three projects it will pursue and begin their construction in 2017 or 2018.

“There’s interest all over the world,” Lloyd says, noting discussions for a tubular system to transport freight or passengers in Europe and Russia. Especially at ports, he sees “a lot of short-term potential to move full-size containers.”

Another entrepreneur, Dirk Ahlborn, announced last year that Hyperloop Transportation Technologies would start building a five-mile track this year in California near the new town of Quay Valley along Interstate-5 midway. HTT is a network of experts with day jobs at universities and companies such as Boeing and SpaceX who moonlight on the project in exchange for future profits.

Its version uses magnets and fans to push aerodynamic aluminum pods through pressurized tubes. The steel tubes are topped with solar panels and carry battery packs to store energy that can be used at night or in cloudy weather.

Ahlborn says Hyperloop is cheaper than rail, because using pylons that run parallel to existing highways obviates the need for train tracks and reduces land acquisition costs. He says the system can operate regardless of weather or natural disasters.

Of course, there are plenty of skeptics who question Hyperloop’s virtues: Could pylons really withstand earthquakes? Could solar panels generate enough power? Could passengers avoid nausea when pods rapidly take off, turn, climb, or slow down? 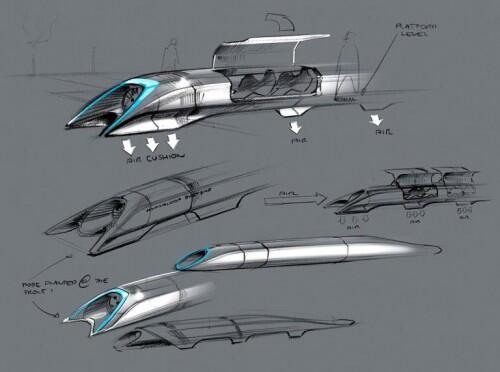 An illustration shows the Hyperloop transport concept, which entrepeneur Elon Musk says could make the trip between San Francisco and Los Angeles in half an hour.
PHOTOGRAPH BY TESLA MOTORS, AP

Musk says he’s not endorsing any company or building his own Hyperloop system, but he wants to move the idea forward. So last summer, SpaceX launched the competition and promised to build a one-mile test track near its headquarters in Hawthorne, California.

Worldwide, students lept at the chance to compete. At design weekend, more than 1,000 students showed up. They represented 120-plus teams from 27 U.S. states and 20 countries, including India, China, South Africa, and Germany.

“One of the great things about this competition is everybody wins, because everybody here is involved in envisioning the future,” U.S. Transportation Secretary Anthony Foxx said in a keynote address, adding government needs to promote innovation.

The teams showcased different ways to levitate their pods. Some used air bearings, which allow pucks to glide on an air hockey table, and others used magnets, which lift the Back-to-the-Future-inspired Hendo Hoverboard off the ground. Musk has leaned toward the former while HTT—and MIT—choose the latter.

“It’s like a fridge magnet. It stays on indefinitely,” says MIT’s Mayo, noting that magnets on the bottom of his team’s pod face downward toward the aluminum track.

“The more speed, the better it works,” he says, noting the pod levitates with less drag at higher speeds. To lift off, he says the pod needs to go at least 22 miles per hour and aims to hit 240 mph on SpaceX’s one-mile test track. Given the short track, the pod has a “fail-safe” hydraulic braking system.

Mayo says he was a little surprised that the MIT team won, because it focused almost exclusively on engineering—not looks. Its virtual design didn’t even include a place for someone to sit, although its actual pod will.

The other teams that ranked highest at SpaceX’s design weekend, in descending order, are Delft University of Technology in the Netherlands, University of Wisconsin, Virginia Tech and the University of California, Irvine. An additional 25 teams will compete at the final test-track this summer though SpaceX hasn’t set an exact date.

“The knowledge gained here will continue to be open-sourced,” SpaceX says on its website. Musk told the students that he expects more Hyperloop competitions in the future.

The MIT students, like other teams, are raising money and seeking in-kind donations to build their pod and transport it to the test site. They expect to obtain the approximately $100,000 needed for their project.

Since most are graduate students, many have previously competed on other MIT teams that build various electric vehicles and also work out of the Edgerton Center on campus. Yet Merian, who graduates in May with a master’s degree in mechanical engineering, says SpaceX is challenging students at a more advanced level than other contests.

“None of us expected to be working on this,” says Mayo, who plans to work at NASA’s Jet Propulsion Lab after graduating in the spring. “It’s a great opportunity to learn and possibly to change the future of transportation.”