The importance of greenhouses 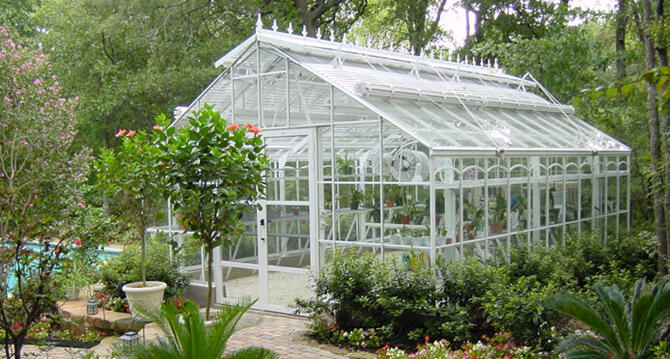 The explanation given in most sources for the warmer temperature in a greenhouse is that incident solar radiation (the visible and adjacent portions of the infrared and ultraviolet ranges of the spectrum) passes through the glass roof and walls and is absorbed by the floor, earth, and contents, which become warmer and re-emit the energy as longer-wavelength infrared radiation. Glass and other materials used for greenhouse walls do not transmit infrared radiation, so the infrared cannot escape via radiative transfer. As the structure is not open to the atmosphere, heat also cannot escape via convection, so the temperature inside the greenhouse rises. This is known as the “greenhouse effect”. The greenhouse effect, due to infrared-opaque “greenhouse gases”, including carbon dioxide and methane instead of glass, also affects the earth as a whole; there is no convective cooling as air does not escape from the earth.

However, R. W. Wood in 1909 constructed two greenhouses, one with glass as the transparent material, and the other with panes of rock salt, which is transparent to infrared. The two greenhouses warmed to similar temperatures, suggesting that an actual greenhouse is warmer not because of the “greenhouse effect” as described in the previous paragraph, but by preventing convective cooling, not allowing warmed air to escape.

More recent quantitative studies suggest that the effect of infrared radiative cooling is not negligibly small, and may have economic implications in a heated greenhouse. Analysis of issues of near-infrared radiation in a greenhouse with screens of a high coefficient of reflection concluded that installation of such screens reduced heat demand by about 8%, and application of dyes to transparent surfaces was suggested. Composite less-reflective glass, or less effective but cheaper anti-reflective coated simple glass, also produced savings.

Greenhouses allow for greater control over the growing environment of plants. Depending upon the technical specification of a greenhouse, key factors which may be controlled include temperature, levels of light and shade, irrigation, fertilizer application, and atmospheric humidity. Greenhouses may be used to overcome shortcomings in the growing qualities of a piece of land, such as a short growing season or poor light levels, and they can thereby improve food production in marginal environments.

As they may enable certain crops to be grown throughout the year, greenhouses are increasingly important in the food supply of high-latitude countries. One of the largest complexes in the world is in Almería, Andalucía, Spain, where greenhouses cover almost 200 km2 (49,000 acres)

Greenhouses are often used for growing flowers, vegetables, fruits, and transplants. Special greenhouse varieties of certain crops, such as tomatoes, are generally used for commercial production.