Burning of waste increase carcinogens in the air by at least 2,300% (AUB Study) 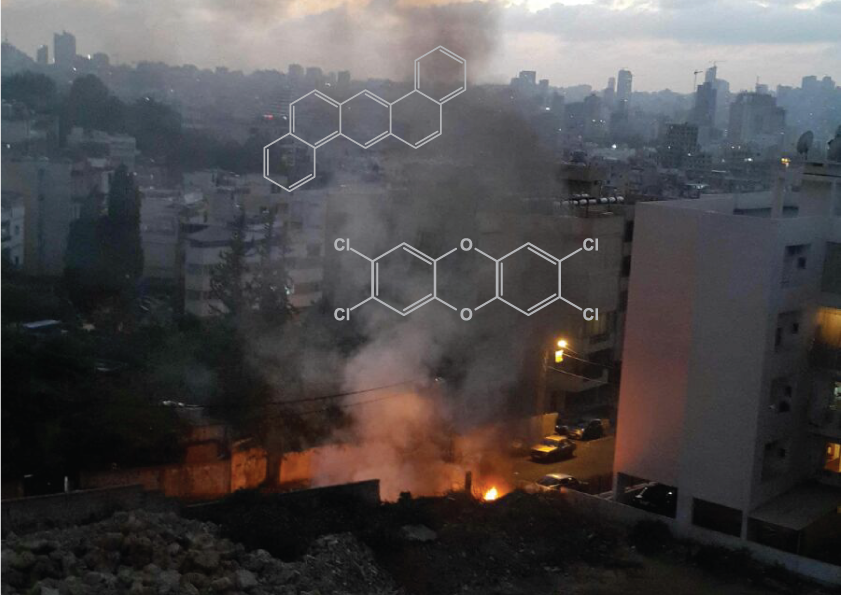 “During waste burning days, carcinogens in the air increase by at least 2,300%,” according to the findings made by the American University of Beirut (AUB) and the Lebanese National Council for Scientific Research (CNRS)’s joint Air Quality Research Unit.

Open-air waste burning in the vicinity of highly populated areas has been on the rise in the wake of Lebanon’s solid waste crisis. Seeing as there was no data available to evaluate the effects of open dumping and burning on air quality and public health, the CNRS and the University Research Board (URB) at AUB sponsored a study by the Air Quality Research Unit led by Dr. Najat Saliba, Professor of Chemistry and Director of the Nature Conservation Center at AUB, to identify the major chemical constituents at open-air municipal solid waste burning sites in Beirut.

Following remarks by AUB President Fadlo Khuri at the opening of the conference, study findings were presented by Dr. Najat A. Saliba who explained that a wide variety of toxins are emitted by waste burning, some of which are well-known to be highly noxious. The study measured the concentrations of some of these toxins on the rooftop of a four-story residential building near an open burning site east of Beirut between October 2 and November 26, 2015. These concentrations were then compared either to previous measurements or to ones taken a week away from nearby burning incidents and after it had rained. Subsequently, the Unit was able to assess the cancer risk of exposure to these chemicals and announced its findings on during the press conference.

In addition, the metal markers of waste burning, which were measured according to US Environmental Protection Agency (US EPA) IO-3.5 methods and include lead, cadmium, titanium, arsenic, and many others, had increased by 98% to 1448 %.

As for the total concentration of organic compounds, specifically the 16 toxic polycyclic aromatic hydrocarbons (known as PAHs, in both gas and particle forms) defined by the US EPA, it more-than-doubled compared to the other samplings. The sampling, conducted according to US EPA TO-13 standards, also showed that the most carcinogenic PAH, Benzo[a]pyrene, was 2.3 times more concentrated.

The total levels of industrial by-products like the 17 toxic polychlorinated dibenzo-dioxins and furans (PCDD/Fs), were also measured according to  US EPA TO-9 methods and found to be 2754 % higher than in previous measurements. The most toxic of them, known as 2,3,7,8, TCDD, reached a remarkably elevated concentration on October 19, while it had never been detected in the past.

To make matters worse, calculations following the procedure recommended by the California Office of Environmental Health Hazard Assessment (OEHHA) Air Toxics Hot Spots Program revealed that short-term cancer risk estimates from exposure to PCDD/Fs and PAHs increased from about 1 person to 18 people per million on the days when waste was being burned.

When the Air Quality Research Unit became aware of the immediate health risks posed by these findings, it immediately released the information it possessed in order to limit the threat to uninformed citizens and protesting activists and NGOs, especially in light of the absence of the public body necessary to properly manage solid waste. The reported findings on the airborne toxic constituents of waste fires and their corresponding health hazards underline the obvious need for solid waste management at the governmental and municipal levels.

After the shocking figures were explained, the AUB Solid Waste Management Taskforce also took the opportunity to introduce its Guide to Municipal Solid Waste Management. This manual gives an overview of past and current Lebanese waste management practices and showcases the Roadmap that the Taskforce has developed to help individuals, municipalities, and unions of municipalities, transition to sustainable practices and “integrated solid waste management”.

Dr. May Massoud, Associate Professor of Environmental Health at AUB, and Mr. Farouk Merhebi, Director of the Department of Environmental Health, Safety, and Risk Management, who co-authored the manual, explained the many facets of sustainable waste management during the conference, and urged everyone to take the initiative toward implementing the Roadmap.

The conference was attended by Dr. Mouin Hamze, Secretary General of the CNRS, and President Fadlo Khuri, who engaged in a Q&A session that followed and addressed the latest research and the effect of carcinogens. The event was an attempt by both the Unit and the Taskforce to warn the community against the dangers of waste mismanagement and advise them on how best to address this pressing issue.

A soft copy of the Guide to Municipal Solid Waste Management Manual can be accessed here: